by Jeremy Patterson | September 20, 2018
Epic GetawayhondaRepo Gone WrongStopped at nothing

It’s rare, but there have been occasions where a driver is determined enough, and ...

It’s rare, but there have been occasions where a driver is determined enough, and lucky enough, to escape the clutches of the repo man and his tow truck. We have seen plenty videos of people trying their hardest to keep the repo man from adding their ride to his tally, but with a very few exceptions, they just make a fool of themselves while often also causing damage to their vehicle.

This video captures the very end of an altercation between a tow truck driving repossessor and the driver of a Honda in a shopping center parking lot. It sounds like the skirmish has attracted a crowd of onlookers, who always seem to take the side of the “underdog” car owner – y’all do realize if they made their payments, this wouldn’t happen to them, right? – and root against the tow truck driver, and the small crowd is treated to quite the spectacle.

Apparently, before this onlooker decided to start videoing, the driver of the Honda saw the tow truck coming and knew he had a small window to escape. It seems he jumped in the car and maneuvered it out of the parking spot, despite being blocked in by the approaching repo man, climbing up and over the curbed landscaping and out into an open area, where he was able to drive away. It wasn’t easy, and it wasn’t pretty, with the Honda sustaining quite a bit of damage as the driver attempted to flee, but he did get away.

If you’ve watched tow truck drivers in action – we’ve shared several videos here on the site in the past – you know it literally takes them just seconds to get into position and hook a vehicle, so the Accord owner knew full well he had to move before the truck’s boom arm got under his car, or his chances of getting away would drop dramatically.

He may have gotten away this time, but you can bet that repo man will track him down again unless he catches up on his payments soon. 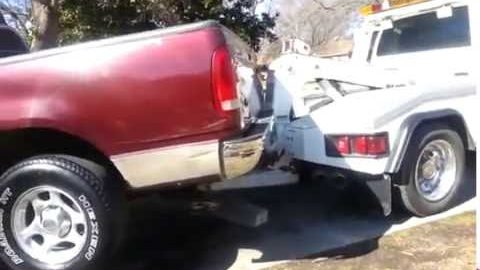