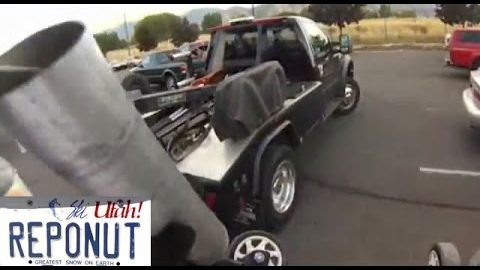 If you’ve ever had an insight to the way that a repo works, it’s definitely not as simple as it might appear on the outside. Sure, to the unsuspecting bystander, it might just look like all that a tow truck driver in this spot has to do is hook up cars to the truck and haul it back to the salvage yard, however, sometimes, things just simply don’t go that smoothly as, believe it or not, people don’t always want to have their cars repossessed, even if they do realize that they’re behind on payments to the point where the bank has to take back the asset in order get their money back.

It seems like most of the time, the people that repossession agents will have an issue with will be the owner of the vehicle, however, every once in a while, it’s someone else who steps in to interfere. From time to time, it won’t be somebody who owns the car or perhaps is related to the owner of the car but instead could be somebody like a security guard who has the job of making sure that everything on their property is taken care of. You could see where there could be a little bit of a conflict here if somebody was behind on their bill and a repo driver was trying to take back a car that was guarded by a security guard.

If you follow along down in the video below, you’ll be able to witness the quick scoop as this tow truck driver swhoops in and takes back a car that he claims was in a lot he was advised to avoid. It’s pretty neat to watch, from the first person point of view, as the driver manages to stealthily sneak in and tries to act as quickly as possible so that he’s able to repossess the car without alerting security or anybody on the premises. In fact, this one almost has a feeling of a sort of spy movie of sorts.