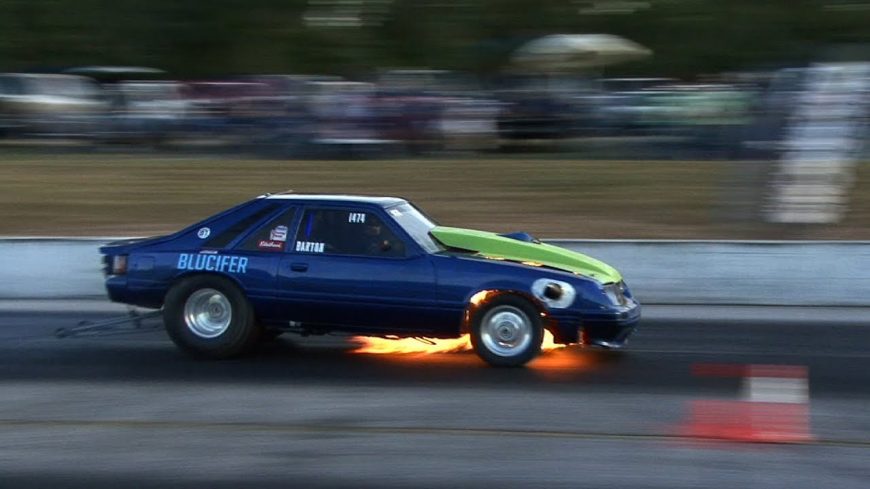 When it comes to drag racing, you really never know what’s going to happen on any given pass out there. Sure, if you’re used to your car, most the time it might plant down and go nice and straight, ripping off a pass with which you’re happy that throws you no issues at all. However, every once in a while, you might come across a pass that gives you a handful to handle. Like we said, just about anything can happen out there and if it’s something that might happen, well, it probably would be in your best interest to make sure that you’re prepared for it just in case it does.

In this one, we check out a pretty scary situation that has a Ford Mustang Fox Body rolling down the track at a no prep and it looks like, straight from the start, the problem starts to arise but, about halfway down the track, things begin to get even scarier as the car goes up completely in flames. After an oiling issue would come to life and send the liquid across the engine bay, that hot oil would eventually ignite and send the car into a ball of fire. Thankfully, the driver was able to get out before the fire reached him and the safety crew on hand really hopped to it, getting the blaze extinguished in a hurry.

Follow along with the situation below that showcases the moment from a variety of different angles thanks to the guys over at Urban Hillbilly Action Videos. There’s no telling what could’ve happened if this one went in a different direction and they weren’t ready for the blaze at hand. Hopefully, this driver is able to pick up the pieces in a rather timely manner and get back to racing before long. It’s always a downer to see a fellow racer run across a struggle like this.