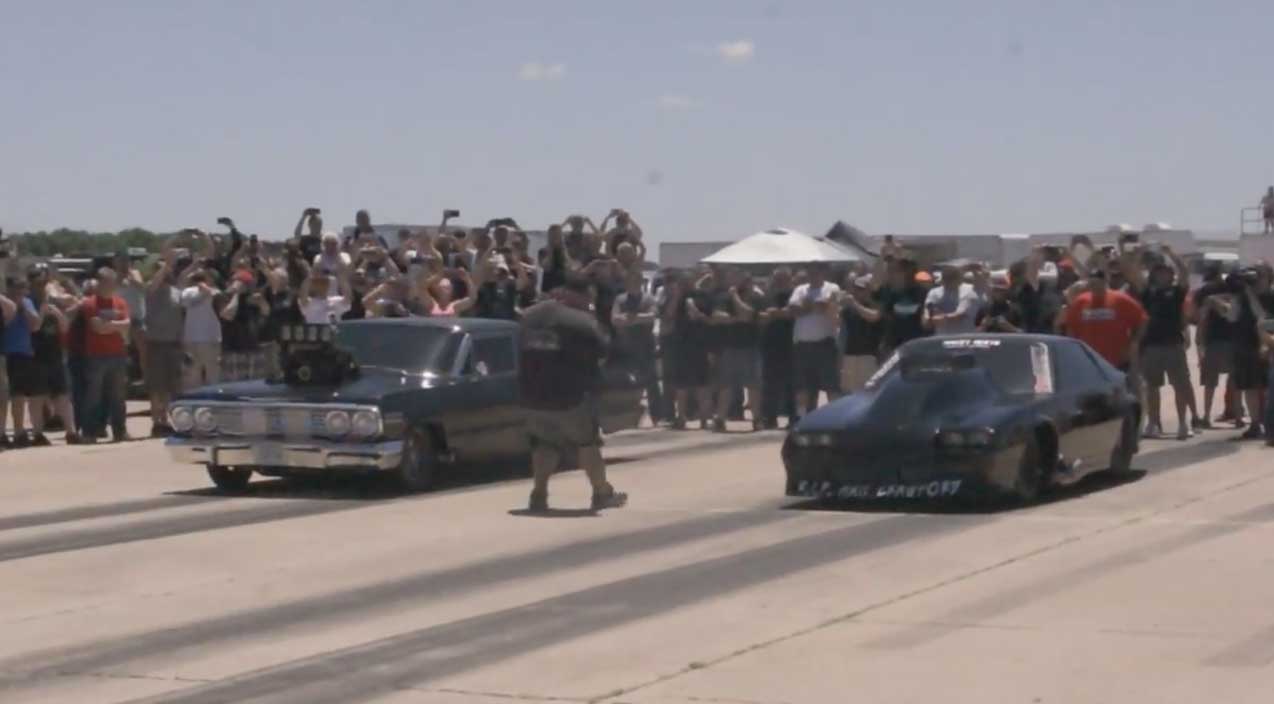 Yes, We know this is an older video, but we felt the need to share it again because it’s a pretty awesome race in what is set up to simulate a racing on an actual street surface, which is what Kye Kelley was originally known for. Having won multiple Cash Days shootouts on the hit show Street Outlaws, which would lead to him getting his own “spinoff” version of the show that was filmed for 2 seasons, you would think Kye would have an advantage at this event. However, the bare concrete of the rented out airstrip proved to be an equalizer for everyone. Kye’s opponent in this video is an alcohol-injected, screw blown Hemi-powered Impala known as Gudfar.

Kye Kelley’s “ Shocker” Camaro features a massive Nitrous assisted-big block, and some serious steamroller tires out back, while Gudfar, as mentioned above is basically running the same type of powerplant you’d find under the hood of a pro mod and also rides atop massive tires on the back end. This matchup should be a good one! Kye has far more experience on this type of surface, where The Gudfar has the power to run with anybody. As with most heads-up races, it would come down to who could harness their horsepower best on the less-than-ideal surface.

As the starter bangs the light, you see Kelley’s Camaro blast off the line like a rocket ship, cutting a 60’ most people couldn’t manage on a well-prepped track. Meanwhile, Gudfar goes up in smoke! The driver does his best, pedaling the car multiple times, before staying in it just a bit too long the and turning in a resume to a nearby wheat farmer for an opening in the “harvesting” department, nearly hitting multiple photographers on his way through a wheat field while trying to play catch up. This is an intense moment that helps illustrate just how much traction matters.

« Murder Nova Takes On “The Giant Killa” At No Prep Nationals