SEGUIN, TX — A total of 20 vehicles at Seguin Chevrolet are missing wheels and tires – Police investigating 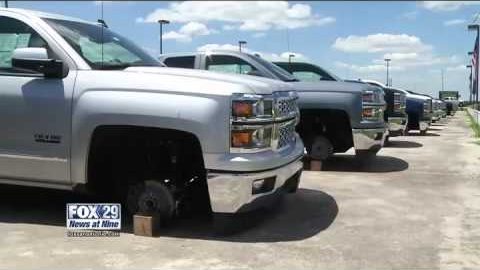 When we were younger, I’m pretty sure that the majority of us were taught not to steal and to only put our hands on what belongs to us or we have permission to use.

However, somewhere along the way those ideas evade some people who are left to live their lives off of the backs of people who actually work hard and bust their asses for themselves and their families.

This time, we check out a Chevrolet dealership that was hit and hit hard by thieves who had their eyes on a collection of wheels and tires and, well, you can probably put two and two together here.

Long story short, the thieves would go after the aforementioned dealership in the most aggressive way possible as the dealership sits directly between a police department and a sheriff’s office. Talk about balls! These guys were almost asking to get caught.

However, the proximity to law enforcement wouldn’t stop them from making their way off with right around $100,000 worth of wheels and rubber, according to the dealership.

The dealership continues that not only is it about the money, but their guys are going to be putting in extra hours as well, having to mount the tires and put them back on the vehicles after making sure that nothing else is broken before selling the cars to the public.

Check out video below as the report tells all about this incident and how it effects the innocent. It’s really a shame that people can’t just go out and make their own money. We’re kind of wondering how one would even go about getting rid of that much inventory without getting nabbed.