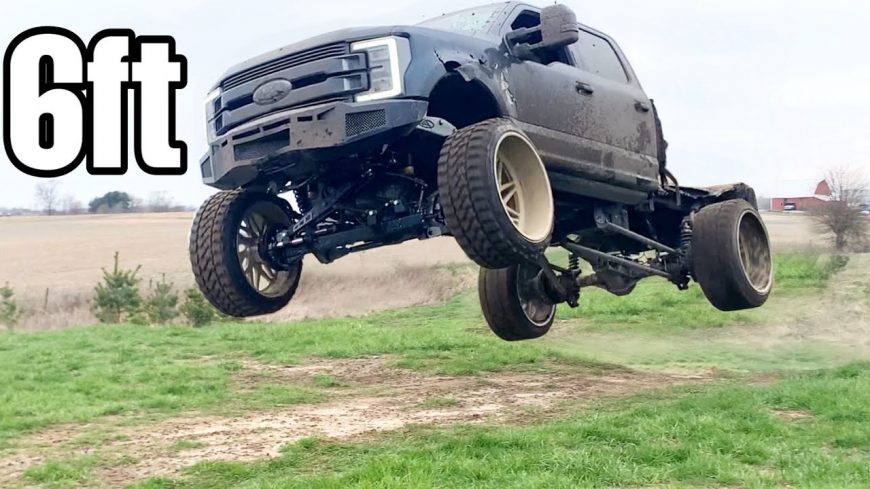 When it comes to the Whistlin Diesel YouTube channel, we had thought that we had seen it all.

For those who aren’t up to speed, basically, the premise of the channel recently has been destroying an expensive truck. The candidate this time is none other than a Ford F-350 that our host claims to be worth six figures. The truck that was built for SEMA but isn’t treated as a traditional SEMA build at all. Instead of being coddled, it’s put through every pace imaginable.

Just to name a couple of trials that the truck has been through, we have seen the bed filled with concrete, the truck turned into a bunker, and an excavator taken into the side of the bed. What we have left is almost a shell of a remnant of the original design. However, this Ford keeps on pushing through each and every challenge.

This time, though, it seems like it might finally meet its match. After being absolutely demolished, the diesel pickup is going to be sent into the air.

If there’s one thing that we’ve noticed about this Ford’s journey, it’s that it has provided a testament to the build quality. Even after all of these torture tests, the pickup truck keeps on rolling. In this particular video, though, we’re going to be able to see if that’s still the case after it’s jumped into the air. These aren’t just a little, easy jumps, either. Once the truck is beaten up like this, no holds barred, not that any were in the first place here.

By following along with the video below, we get to watch this pickup launched 6 feet into the air. That’s definitely not a feat that too many people are going to be willing to put their trucks through, let alone something that was originally this expensive.

« Mustang Rips Away From Redlight, Immediately Get Sideways… It Goes VERY Badly