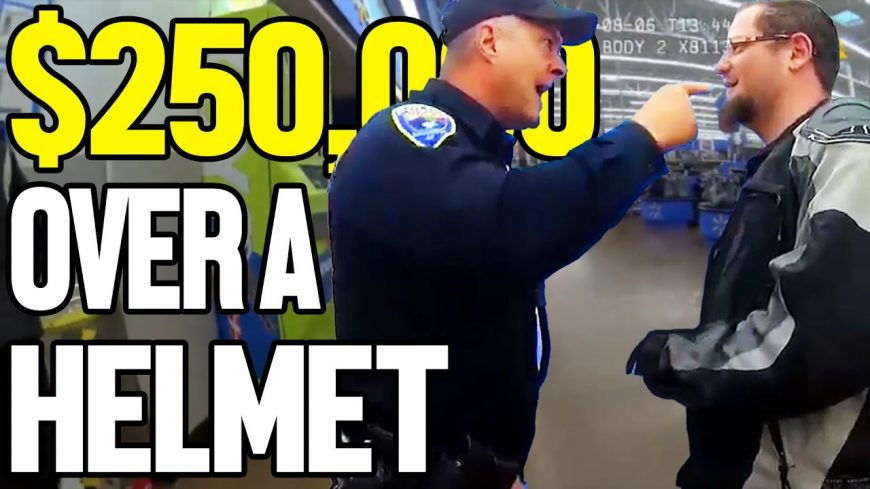 Imagine this. You ride up to a Walmart of your choice right before work to pick up a couple of things. As you are riding a motorcycle, you decide to leave your safety gear on. It’s easier this way instead of taking off your jacket and helmet which would create quite a bit of equipment to carry. Before you know it, you’re soon being interrogated by police and taken to jail for wearing that gear in the store.

Wearing a helmet in a retail store is a little bit unconventional and most people would probably rather just grab a cart and put their riding gear in it but this particular rider decided to do otherwise.  Sure, someone is probably going to get a couple of odd looks walking through Walmart in complete motorcycle gear. However, the act isn’t necessarily illegal at all.

For 22-year-old Freedom Pfaendler, though, he would be publicly ridiculed by police for his experience in Walmart. As the man-made his way through an Arizona Walmart, wearing his helmet and listening to music, a manager would supposedly approach him and ask him to remove the helmet. However, the man says that he didn’t notice the manager acknowledging him and the music made it impossible for him to realize that he was being asked to do anything at all.

Therefore, instead of making a better attempt of approaching the man directly, the manager decided to call the police. Perhaps, he hadn’t realized that the motorcycle rider was listening to music and couldn’t hear him. In any scenario, the police would show up to the Walmart, fearing that Pfaendler was disguising his identity with the helmet and attempting to do wrong.

One thing leads to another and before we know it, an overly emotional police officer ends up going on a rant, screaming at the suspect in the middle of the street. When all of the chips fell, Pfaendler would be arrested and taken to a detention center for 17 hours. Eventually, the charges against him would be dropped. However, the 22-year-old filed a suit of his own for being “Illegally searched, falsely arrested, maliciously prosecuted, and publicly defamed.”

Below, we check in with the Audit the Audit YouTube channel as they break it all down for us. The video also shows the interaction that kind of makes us cringe a little bit as it seems to display a clear mishandling of justice when the officer basically tells the man with the riding gear to shut up when he’s trying to explain himself.

Pfaendler has since offered to settle with the city for $250,000 but the offer has been rejected.