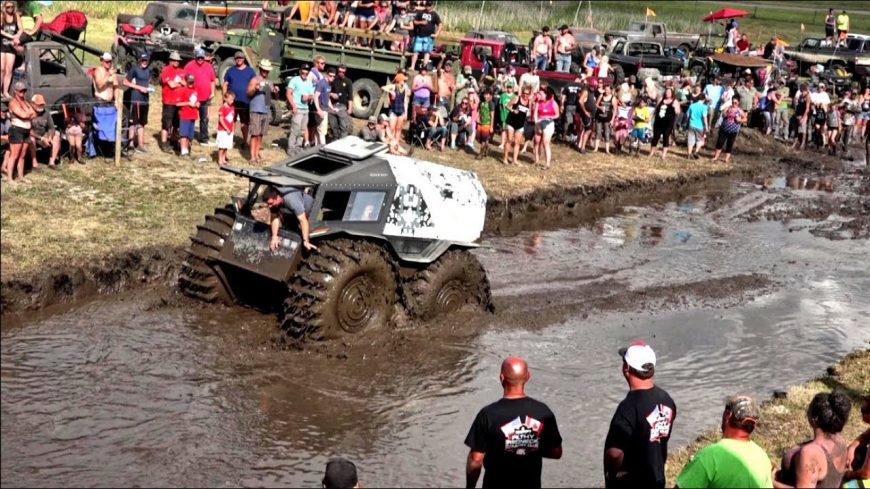 If you’ve never heard of the concept of the bounty hole, basically the premise is that folks bring their vehicles to this mudhole that’s almost impossible to cross with any normal vehicle. From there, the rest plays itself out as they have a competition to see who can cross this hole the quickest or get the furthest into it without getting stuck. Most of the time, this usually ends with trucks making it a good portion of the way across before finding themselves unable to move, slinging mud in every which direction. It’s a pretty interesting competition to tune into and watch.

This time, it looks like everything is panning out as according to plan, that is, until another unlikely competitor comes in the mix and changes things up a little bit, seemingly taking the rules and everything that you know about such a competition and throwing them out the window as this machine really grabs onto the situation and alters the dynamic entirely. I’m sure that everybody with those purpose built mega trucks were looking on in awe as such a small and mighty machine was able to completely dominate on that day.

If you follow along down in the video below from the Ostacruiser YouTube channel, you’ll be able to watch as the miniature tank is known as the “Sherp” ends up barreling into the mud pit, not only going all the way across it, which none of the mega trucks could manage to do but then, turning around and coming back across the pit once again to really show its dominance. We’re unsure if this machine was actually a part of the battle for the bounty here and took home any prize money or not but one thing is for certain: it certainly did steal the show that day on its way to quite an amazing performance.