Side By Side With Attitude! Gets Fully Submerged, And Makes It Through 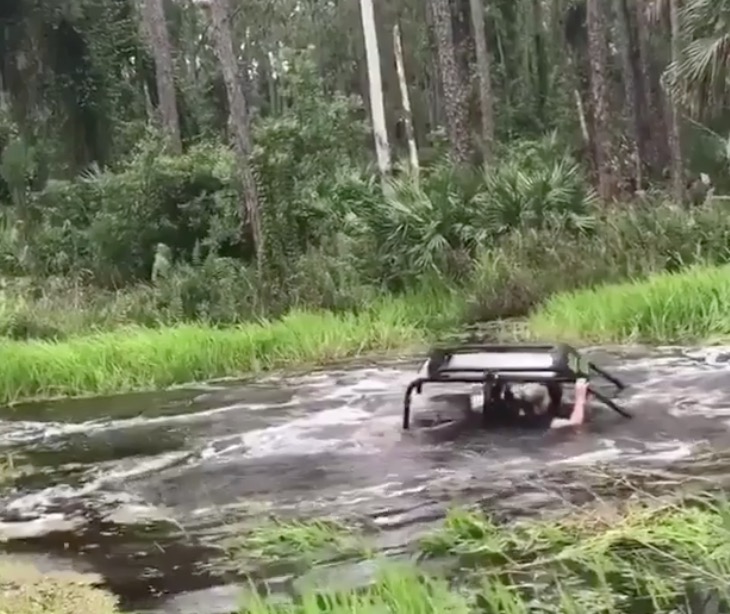 I’m not even going to lie, I watched this video several times thinking it was somehow faked! And I have to say, I am still at a loss for trying to explain how this happened, but it’s dang sure cool to watch over and over again.

Internal combustion engines have to have three things to run: fuel, oxygen, and a source of combustion, be it a spark plug or extreme heat and compression like a diesel. Without all three of these, no engine will run, at least that I’m aware of. Fuel comes from the fuel tank, pumped into the engine via fuel injectors or a similar method of delivery from the fuel tank. Spark comes from the spark plugs or from the heat and compression. These two systems are self-contained and feed directly into the engine.

Oxygen, however, has to come from outside. While you could feed an engine with compressed air, the sheer volume required to operate even a small engine just wouldn’t be efficient. Imagine driving around with a trailer the size of a tanker you see behind 18 wheelers just to get to work and back, and that’s if you have a short commute.

So air has to come from the environment. We’ve seen plenty of off road rides that have “snorkel” setups that route a long tube from the intake up above the hood, and sometimes even above the roof, to make sure there’s no loss of air supply to the engine if the driver decides to hit some deep water. From what I can see, this RZR has no such snorkel, so I’m really not sure where the air is coming from while this thing is playing submarine, but the video itself certainly seems to be authentic so maybe it’s just routed in a way that it’s not visible from this angle.

Either way, there’s no denying the couple operating this side-by-side are ballsy, because they clearly know the water is way deep, and they dive right off in it, quite literally, only to come roaring out of the other side just a moment later. The passenger coming up for air is absolutely what makes this video, and these ATVrs, awesome!

« Donk On 26s Dominates Everything In Sight On The Strip!!