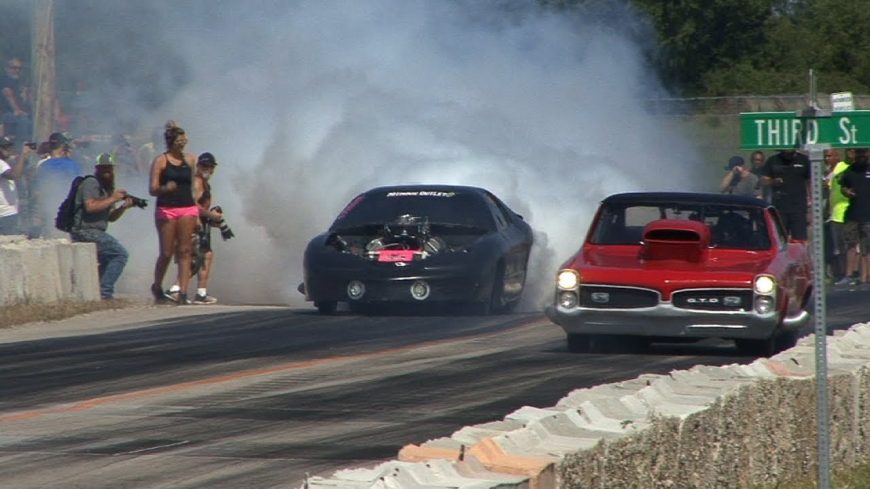 Ladies and gentlemen, I’m going to tell you up front that what you are about to watch is liable to make your butthole pucker! When you take two high-powered nitrous hotrods and put them side by side on a truly treacherous street, you get a battle for the ages just like this one between David “Bird” Jones and “Hollywood” Bobby Treadwell.

However, when it comes down to “lift and you lose”, these drivers push their cars to the edge of control trying to keep their foot – and the massive rear tires – planted. Despite both cars laying down nice fresh patches of rubber in the burnout, traction seems to be a rare commodity at the Lone Survivor Street Race, leaving it up to the drivers to finesse, or perhaps manhandle, their cars toward the finish line.

From the hit, Treadwell’s GTO makes a hard move toward the wall while Jones’ Firebird looks to be off to a fairly clean start. However, while Hollywood Bobby is gathering his car up and getting it pointed straight down the groove, Bird begins to find himself wrestling his own car, trying to keep the nose pointed toward the stripe.

The farther he gets down the track, the worse things get, though, and you can see him driving for all he’s worth to keep the car in his lane. It seems likely Jones was wishing to be back in his bracket car, which he had driven to the finals of a bracket race the night before this event, as he fought the Firebird to maintain control while Treadwell began to pull ahead.

At the stripe, the GTO would carry Bird through by about a car length and a half, taking the win and the paycheck back to Tulsa. This race proves that both of these guys have earned their reputations as great drivers since either of these cars could have been in the wall or into the other drivers’ lane had they not known exactly what they were doing.

Mention how David was at a bracket race the night before, and drove up to run in this race last minute, and made the finals of both

« Hellcat Burns To The GROUND!