Smoke Emerges Behind Dash Of Land Rover, Whole Shop Goes Up In Flames In Seconds

Smoke Emerges Behind Dash Of Land Rover, Whole Shop Goes Up In Flames In Seconds

When it comes time to wrench on a car, nobody is perfect. Even those who have a lot ...

When it comes time to wrench on a car, nobody is perfect. Even those who have a lot of experience and have been turning wrenches for their entire career will admit, most of the time, that they’re learning something new every single day. It might come as a surprise to you but it really seems like with all of the new technology out there that’s growing every day, it’s happening so quickly, in fact, that it’s nearly impossible to be able to go out there and keep up with all the things that are new in the industry.

However, while it might be impossible to be perfect, there are a couple of things that you might want to observe no matter what you’re working on, for the most part. The perfect example of some of these things that you should observe when going to work on something electrical would be the idea of making sure that you disconnect the battery terminals first and also make sure that there is a fire extinguisher nearby.  Now, we’re probably all guilty of not going through these precautions every once in a while but failing to do some of these things might just mean that you’re going to end up having a bad day.

This time, we end up checking with the situation that we can’t say for sure was started because of failure to take part in one of the previous preventative measures, however, it really does show you how quickly things can escalate out of control if you aren’t careful. As this Range Rover was undergoing some service, eventually, those responsible for it would notice that there was smoke coming out from under the dashboard. As if it weren’t bad enough that the vehicle was about to ignite, eventually becoming engulfed in flames, the whole place would later go up in a ball of fire. Luckily, it doesn’t appear as if anybody was hurt in the incident but this one might have been a hard lesson learned, to say least.

We have a feeling someone got fired that day… literally. 😛

Tesla Rebuilder Has Car Catch On Fire, Things Got Intense 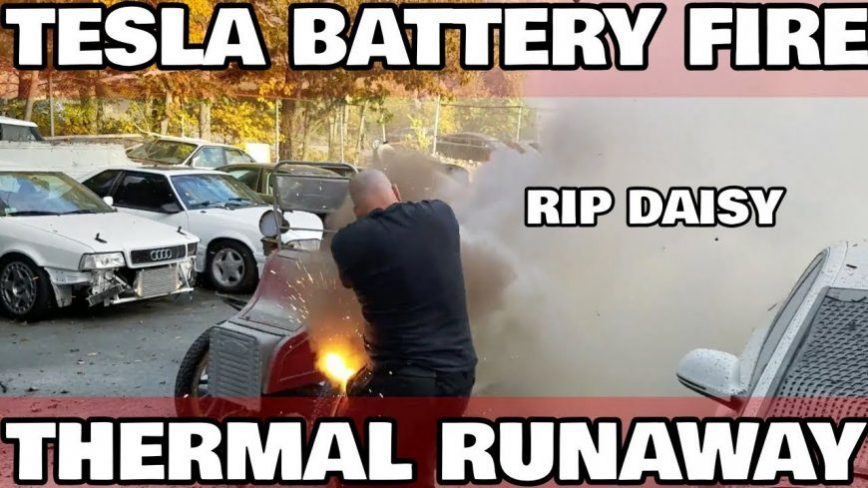