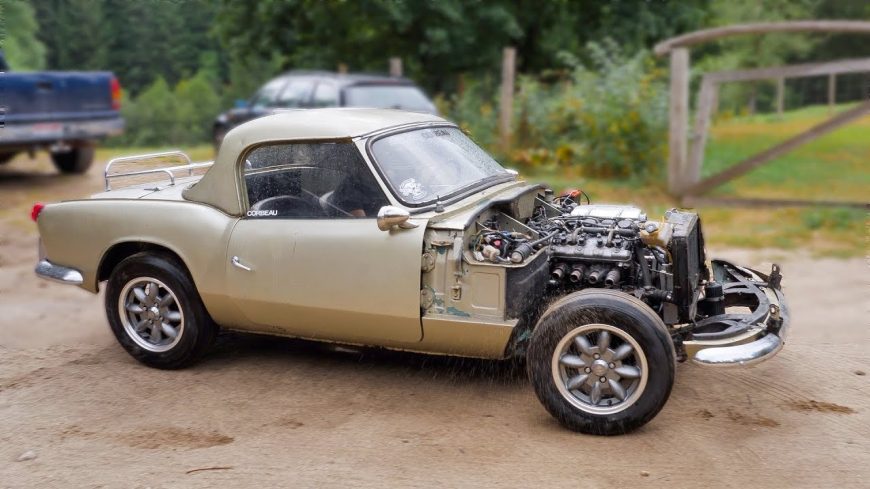 The crew over at the Grind Hard Plumbing Company YouTube channel has seemed to gather quite a bit of momentum recently. Normally, we find them really beefing up Power Wheels toys. This might involve things like a custom frame and bigger engines. However, this time, they decided to focus their efforts on something a little bit bigger. Instead of Power Wheels, the guys will be working on a full-sized vehicle. The project comes in no other form than that of a Mazda RX-1. However, as one might be able to guess, what they’re doing is anything but conventional.

Now, they aren’t doing a sort of LS swap or anything like that. Instead, the power comes from a much more unlikely source. Under the hood is none other than the power of the snowmobile. When we originally saw this thing, we couldn’t help but wonder if snowmobile power would be enough to get an entire car moving. After all, such a vehicle is a little bit smaller than a full-blown automobile. However, it seems like the power source seen here provides more power than one might expect. In turn, there aren’t very many platforms that get much lighter than the RX-1.

By following along with the video below, we get to see how exactly a project like this comes together. When it comes to these guys, we know that any project taken on is going to be anything but conventional. At the end of the day, we would classify most of their videos under the “we didn’t know we wanted this until we eventually saw it” category.

When we see these sorts of projects, we can’t help but be amazed by the different creative outlets that YouTube has ended up providing a platform for its creators to put together. Ladies and gents, the snowmobile powered Mazda!

« Ram Adds 693K Pickups in US to Recall For Tailgate Problem