When we really take the time to do a little bit of research, it’s crazy to ...

When we really take the time to do a little bit of research, it’s crazy to think about all of the items that have simply been left behind and forgotten about, to an extent. As it relates to Speed Society, many times, that comes in the form of a good old fashion barn find. This time, we head back to Soviet-era Russia to check in with a machine that certainly seems to be larger than life.

Imagine walking down the beach, only to find a massive airplane like this resting and waiting for someone to walk by. While the massive airship doesn’t seem to be near any homes, seeing the massive vessel on the beach is certainly a little bit jarring regardless.

As the description of the video tells us, ” [A] drone captured the massive Soviet-built Project 903 Lun-class ekranoplan lying on the Caspian Sea shore near the city of Derbent in Dagestan on Monday.”

Ruptly continues, “The war machine, dubbed the Caspian Sea Monster, was towed from the Kaspiysk naval base to Derbent earlier this year to be exhibited in a yet-to-be-built military-themed park.” They do contest, thought that “Some on social media have claimed that the ekranoplan has been abandoned on the shore due to damage it suffered during its delivery to Derbent.”

Lastly, we’re informed that the 903 Lun was built in the Soviet Union in the mid-80s. The plane became the first and only missile-carrying ekranoplan in the world. The project would later be shut down due to a lack of funds.

By following along with the video below, we get an up-close and personal view of this warship and what it looks like, just sitting there. When they give us the opportunity to look inside of something like this, it really gives us a sense of what it must’ve been like to be a part of such a crew.

The only project 903 Lun rocket ekranoplane in the world was delivered to the Patriot Park in Derbent from Kaspiysk. Towing the plane by sea took about 14 hours, and it took another day to prepare the ekranoplan for transportation.

It is planned that “Lun” will become the central exhibit of the Derbent Park “Patriot”. Built at the Volga plant in Nizhny Novgorod, in 1986 the ship was redirected to Dagestan for testing. Upon their completion in 1991, the ekranoplan was transferred to the Caspian Flotilla.

This is the only fully built project 903 ship out of eight planned. Due to its high speed of movement and stealth for radars, “Lun” could approach aircraft carriers at a distance of accurate missile launch.

The Fastest Ship in the US Navy: Boeing Pegasus-Class Hydrofoils (720p) 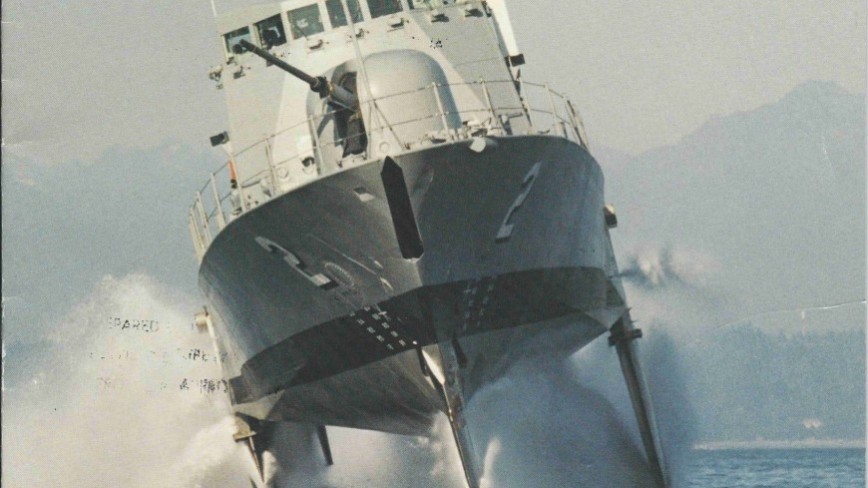