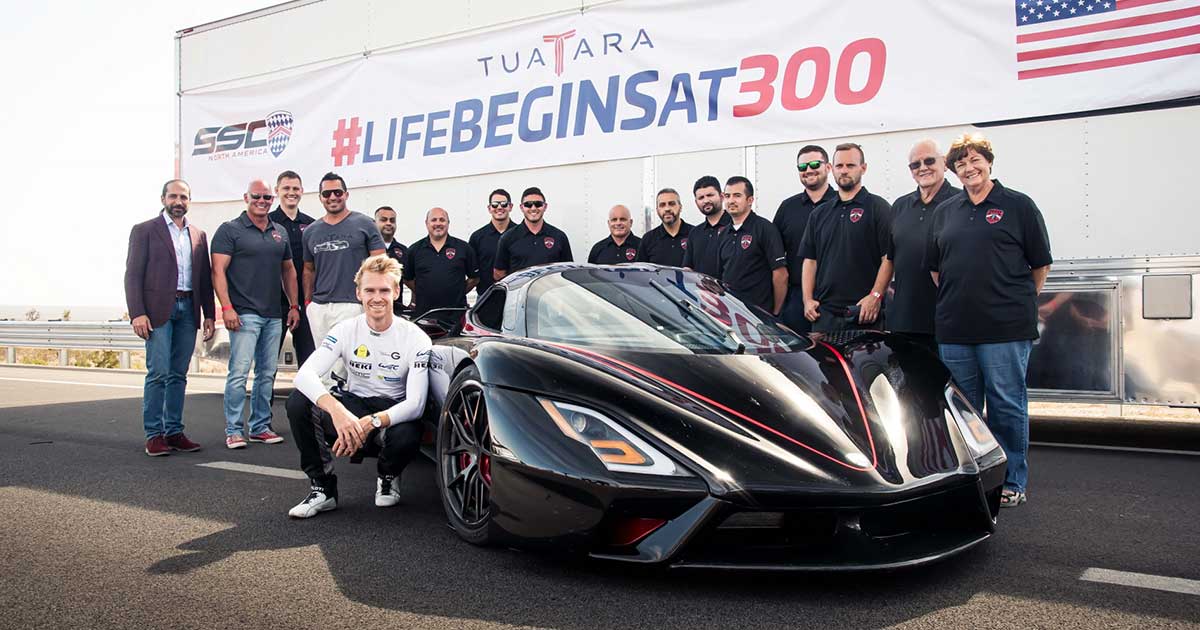 For those who haven’t been following the story, we will give you a brief background here. Essentially, a couple of days ago, the SSC Tuatara would lay claim to the title of the fastest production car in the world. Naturally, with these kinds of records, they’re always brought into question. Most times, it usually just ends up being some sort of a conspiracy but this time, a credible YouTuber in Shmee150 decided to really break down the run and things have gotten incredibly murky.

We would probably recommend watching his video here. However, the long-story-short of the matter is that the car made a pass on a closed down public highway. This highway had several medians on it and when doing the math, Shmee would determine that the car had been traveling above the average speed, obtained by simple math after watching the video, for the entire distance between medians.

In other words, by the nature of an average, something wasn’t right. The numbers would spell out the fact that the car was actually going much slower in the video than SSC had claimed.

A couple of other oddities were the fact that the speedometer in the car was blurred out and the data on the laptop, seen in the video, matched what SSC had presented. While the first natural reaction would be that the video had been mixed up, the laptop data would kind of rule that one out unless an unlikely piece of information comes forth.

It’s all good, though, right? Surely, they weren’t relying solely on the video to validate a record attempt like this. They had to bring in the professionals, right? Well, this is where it gets even sloppier.

Via The Drive “On Wednesday, SSC issued a statement admitting that the onboard video allegedly depicting the 331-mph run was “substantially incorrect,” capping a whirlwind few days in which Dewetron, the company who supplied the GPS speed recording technology, distanced itself from SSC and denied SSC’s claim that it had “validated” the record attempt.”

In fact, Dewtron seemed to have no idea about the record attempt, publicly stating that they didn’t validate any data from the world record attempt or testing of the Tuatara. Dewtron also confirmed that none of its staff were on the scene of the attempt, which is supposedly an important part of validating a record.

Their statement reads “Since the results of measurement data highly rely on the right setup, on the regular calibration of the systems and sensors in use as well as on many other parameters, we are not able to guarantee the accuracy or correctness of the outcome.”

However, SSC does claim that it has a letter from Dewtron, confirming the accuracy of the equipment provided to SSC, which will be submitted to Guinness as a part of the record attempt filing.

The claims continue as it seems as if SSC is basically blaming its media partner for the debacle, saying that videos that weren’t supposed to be released ended up in the official cut. These clips were “Not an accurate representation of what happened on October 10,” says SSC. They also allege that syncing the data with the feed was another issue.

As Shmee pointed out, the laptop sitting in the car matches the overlay which points to the world record. This was a claim that SSC failed to address as far as we can tell.

In the full statement released by SSC (below), they do make mention of the actual video being worked on with the proper clips in place. That would hopefully clear things up. Hopefully, everything is just one big misunderstanding but as of now, the car world will be watching and waiting to see if SSC can become the king of speed. Photo credit –

“Three years ago, SSC began working with Driven Studios, a video team to document what seemed like every waking moment of the Tuatara hypercar and those who’ve created it.

They’ve since interviewed virtually every team member and consultant, captured the car in build and throughout extensive testing, and have played a key role in not only capturing, but in producing the record run on October 10 in Pahrump, Nevada. They have become a trusted partner of the SSC family.

On the big day, October 10, there were video cameras everywhere — in the cockpit, on the ground, and even secured on a helicopter a low-flying T33 to capture the car at speed.

The morning of the run, the record was achieved, we were over the moon. We kept the news under embargo until October 19, with hopes of releasing a video to accompany the press release.

On October 19, the day the news broke, we thought there were two videos that had been released — one from the cockpit, with data of the speed run overlaid, and another video of b-roll running footage. The cockpit video was shared with Top Gear, as well as on the SSC and Driven+ YouTube pages.

Somehow, there was a mixup on the editing side, and I regret to admit that the SSC team hadn’t double checked the accuracy of the video before it was released. We also hadn’t realized that not one, but two different cockpit videos existed, and were shared with the world.

Hypercar fans have quickly cried foul, and we hadn’t immediately responded, because we had not realized the inconsistencies — that there were two videos, each with inaccurate information — that had been shared. This was not our intention. Like me, the head of the production team had not initially realized these issues, and has brought on technical partners to identify the cause of the inconsistency.

At first glance, it appears that the videos released have differences in where the editors had overlaid the data logger (which displays speed), in relation to the car’s location on the run. That variance in ‘sync points’ accounts for differing records of the run.

While we had never intended for the video captured to play the role of legitimizing the run, we are regretful that the videos shared were not an accurate representation of what happened on October 10.

Driven Studios does have extensive footage of everything that transpired and is working with SSC to release the actual footage in its simplest form. We’ll share that as soon as it’s available.”