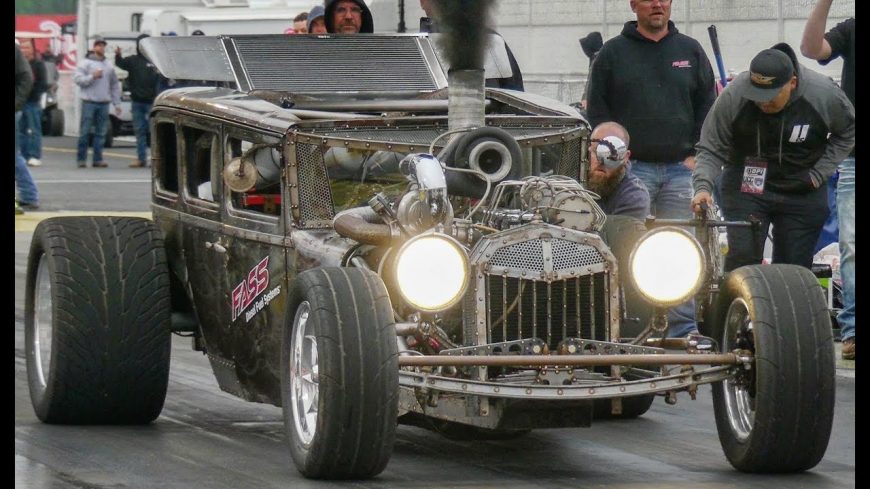 If you ask any car fanatic across the landscape, most will probably tell you that they can appreciate a well put together rat rod as it’s fun to look at a creation that has come together all from spare parts and creativity that someone has managed to muster within the walls of their own garage.

While most rat rods are designed simply for looks and for a nice cruise, this time, we check out a rat that certainly has a little something different in mind. Sure, it does have the looks and essence of a rat rod. However, it adds a whole other layer on top that you just have to appreciate.

Instead of being something that you’re simply limited to cruising around with, this rat has its fair share of power. It most certainly is loud and rowdy as it isn’t trying to hide that power one bit. We even get the opportunity to watch it go down the track once!

For those who think that they might recognize this beast of a machine that’s because it’s famous! The rod was built by Steve Darnell of Welderup. Even without its star appeal, this rig is nothing short of a head-turner. With all of the small touches and attention to detail, it’s certainly something that you’ve got to feast your eyes on as a car enthusiast. We’re not sure how so much cool factor is fit into one machine. Steve certainly managed to pack a bunch into this one, though!

Check out the video down below that shows this Cummins diesel machine idling and launching down the track. This thing really belts out an impressive sound and releasing a giant cloud of black smoke to go along with it. This is most certainly one impressive machine. With all that torque, traction is at a premium, though!