Stirling Engine Powered Canoe… For Those Without a Paddle! 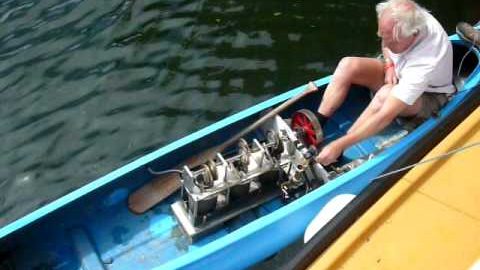 The Stirling Engine, a design originally presented by inventor Robert Stirling all the way back in 1816, uses an external heat source to provide the energy that moves the pistons instead of relying on explosions taking place inside the combustion chamber. This design is not only quieter, since there’s no combustion going on inside the engine, but incredibly efficient since there’s no intake and exhaust, at least not in the way we think of it when we think of a typical powerplant.

Instead of pulling air in and combusting an air/fuel mixture to create a controlled explosion in the engine, the Stirling instead relies on an external source of heat that can come from a variety of sources, including solar power or in the case of the one powering this small canoe in the video below, a small propane burner below the engine itself. Pushing air between the hot and cool cylinders using a regenerator that makes the engine functional, two large pistons keep the flywheel spinning and the engine churning out a few high-efficiency horsepower. Since the engine isn’t constantly pumping fuel in and out, it can be up to 50% efficient, making it a great option for applications such as this small boat.

The canoe, owned by Julian Wood, was featured during the Thames Traditional Boat Rally on the River Thames. It appears that Wood has a small propeller driven by a chain on the back of what we would typically consider the crankshaft. We don’t know how much power the little engine makes, but it’s clearly enough to move Wood and his boat around the river effortlessly. It’s not going to set any speed records, but Julian is clearly able to get wherever he wants to go just by pointing the boat in the direction of travel and enjoying the ride!

« The Original Flying Car is For Sale on Ebay at a Staggering Price!