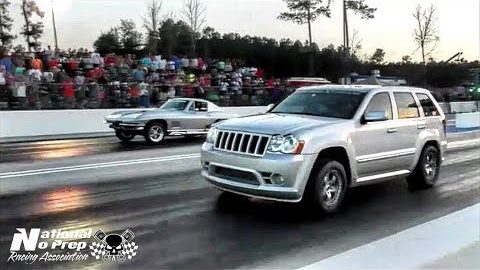 The cat is out of the bag: AZN’s Jeep just might be the the king of the sleepers. I mean, we can keep this in perspective, it is a V8 powered Jeep Grand Cherokee riding on drag radials on all four corners, but it IS still a Jeep and it’s still relatively tame, at least until he stomps on the throttle. The supercharger tucked out of the way under the hood screams to life and sends gobs of torque to all four wheels, making the Jeeper Sleeper a monster on the street and the track.

We’ve seen AZN take the win in the daily driver shootout on Street Outlaws and we’ve seen him take down some pretty stout rides in grudge races, but this slick little 1967 Corvette looks and sounds like it may give the Jeep a run for it’s money. The great looking little ‘Vette sounds pretty gnarly, and these early ‘Vettes with late model running gear pinned underneath can certainly be built to hook hard and run really well, all the while appearing like your run of the mill midlife-crisis-mobile to the untrained eye. But would it be rowdy enough to take down the all-wheel-dig of the Jeeper Sleeper at Orangeburg Dragway’s Street Outlaws: No Prep Kings filming?

After both rides clean off the tires and heat them up a little, they roll up to the line and into the staging beams. When the green light drops, AZN’s ride actually does spin just a bit, though it quickly regains traction. The little Vette cut a great light and left hard, but the torque of the Jeep allowed AZN to drive around by the time both cars passed the camera. While it’s hard to tell how close they are at the stripe, it does look like a great, close race but AZN and the Jeeper Sleeper do take the win at the stripe.

This new ride is proving to be quite the formidable opponent for some pretty badass rides, with the perfect combination of power and dependable traction. We just may see a lot more of AZN in the Jeeper Creeper if he keeps this up!