Street Outlaws Behind The Scenes: AZN vs Big Chief In The Daily Driver Battle

Street Outlaws Behind The Scenes: AZN vs Big Chief In The Daily Driver Battle

This week, Street Outlaws was taken over by daily drivers, and to be honest it was ...

This week, Street Outlaws was taken over by daily drivers, and to be honest it was one of our favorite episodes yet! Absent was the tension that surrounds the typical race nights, replaced instead by a lot of fun and cutting up, bringing some much needed laughter to the streets of the 405.

AZN brought out his badass sleeper Jeep to take on the other big hitters from the Top 10 list in their daily driven rides.

While AZN’s Jeep looks the part of a sleeper, it’s actually packing quite a punch thanks to the big ProCharger hung on the front of the already-respectable V8 powerplant in the SRT edition of the Jeep Grand Cherokee.

However, he’s lined up with none other than the Racemaster himself, Big Chief and his sinister black Cadillac CTS-V known as Caddy Jack. While many of the daily drivers had plenty of power on tap, they all seemed to be under-tired for street action, giving AZN’s AWD Jeep a decided advantage in the traction department. However, Chief is no stranger to going fast on the street in a variety of rides and has Caddy Jack riding on some massive drag radials out back that should help equalize things off the line.

As soon as Farmtruck drops back and hits the light, both rides launch hard, with the AWD Jeep grabbing with all four tires and pulling out to a visible lead off the line. Would Caddy Jack have enough power to reel in the Jeep up top? To be honest, it’s hard to say for sure in this video, but all we know for sure is that AZN hit the brakes first, which usually means he got to the finish line first.

That, ladies and gentlemen, is the very definition of a badass daily driver! AZN knows how to get it done on the streets for sure, so now the question is how long will it be before we see the SRT Grand Cherokee out fishing with him and Farmtruck? 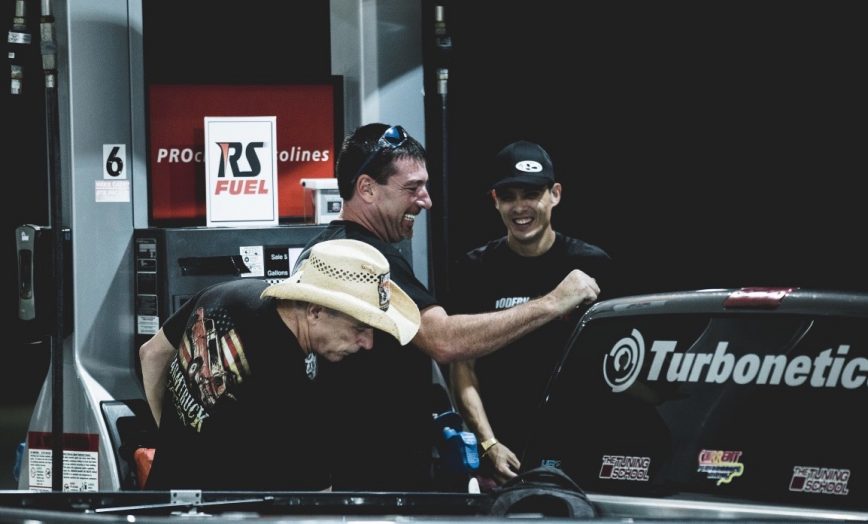