When it comes time to go to war at a no prep race, the adrenaline really gets to ...

When it comes time to go to war at a no prep race, the adrenaline really gets to flying every which way. The suspense is always at an all-time high in these things. One never really knows what’s going to happen. One second, we’re watching the drivers do their burnouts and line up at the starting line. In the next couple of seconds, all hell could break loose. It’s really a show for the spectators as the drivers are out there trying their best to keep it all together. This comes as they attempt to use the least amount of surface area possible to go from “A” to “B.”

In this one, on center stage is none other than a couple of Street Outlaws. Staging in one lane, we have Big Chief and The Crow. In the next lane over, we see Reaper and his mean Chevrolet Camaro. After shredding some rubber to make sure that their tires are nice and hot, it’s time to get down.

Both competitors have the same goal in mind as they get ready to go at one another in a battle of power and traction. No matter how the matchup looks on paper, the result may vary. We never really know what’s going to happen in these races and consistency is key! It’s a lot easier said than done, that’s for sure!

If you click play below, you’ll be set up trackside to see exactly how these competitors do as they go for the kill shot at No Prep Kings. This throwdown has both of the drivers battling with the conditions as they go for gold. Who is coming out on top in this TomEighty video? There’s only one way to find out for sure!

This is bound to be a good one as this pair have both been known to really rip!

THE LATEST: AZN Gives an Update on the Dung Beetle 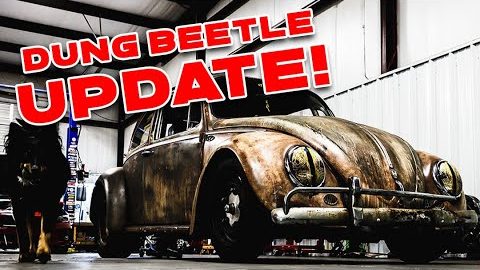