Street Outlaws Farmtruck Opens up a Can of Whoop A** on AWD Boosted Truck. 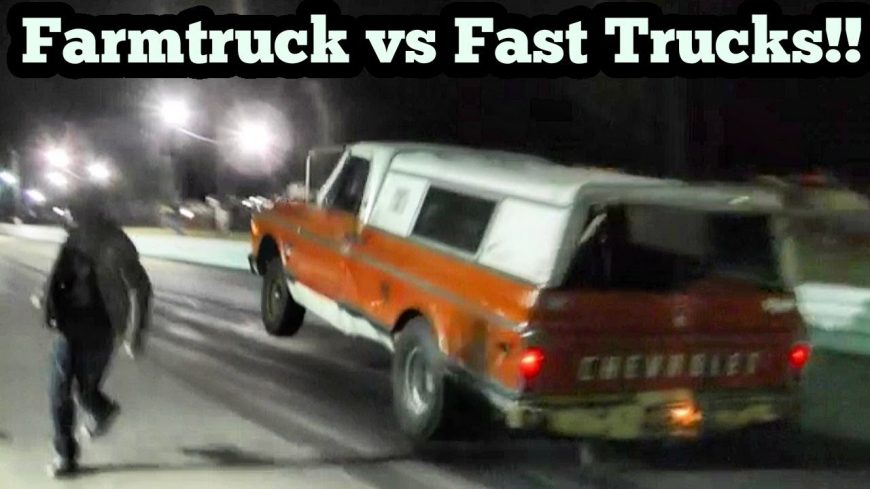 When it comes to going fast, Farmtruck might not be the most conventional equation to get there. At the end of the day, the machine is incredibly heavy. It even has a cap on the back to add to the extra weight.

However, no matter how heavy this thing might be, it was born to kick some rear end. Once the Farmtruck lines up against a whole host of opponents, it’s pretty much game over. The truck might not look like much but let’s just say that’s exactly what they want you to think. Once opponents are lulled to sleep by the battered appearance, Farmtruck strikes, breaking out the power as it shifts the weight to the rear of the vehicle and launches!

This time, we get to see the Farmtruck in action as it really puts the power to the ground. In the next lane over, we have a couple of trucks that have been eyeing up the superstar of a machine. When the bulky orange Chevrolet C10 pulls up to the line, the opposition just so happens to be an all-wheel-drive turbo Chevrolet Silverado and a twin-turbo Chevrolet S10. Even though both of these machines are pickup trucks themselves, we would probably bet that the Farmtruck still is substantially heavier than both of them.

Below, we get treated to an open can of whoop-ass by the beat-up old orange pick up truck as it takes on the Silverado. In the second race, it appears as if mechanical issues might’ve rained on their parade, though.

This machine never ceases to amaze us, even after we have watched it make pass after pass. Even though a true sleeper isn’t known by its opponent, and the Farmtruck’s cover has been completely blown, our jaws are on the floor every time that the thing pulls those front wheels up in the air. It’s just not every day that we see a big-bodied monster like this make its presence felt.