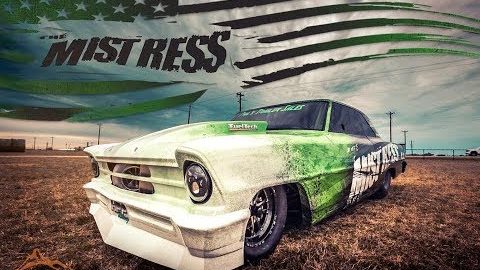 Fans of Street Outlaws will likely remember the Mistress Nova owned and driven by the likable Shawn Wilhoit from several appearances on the show over the past several seasons.
It’s been a while since we saw the Nova after it was replaced by a 1967 Camaro to try to keep up with the changing landscape of the street racing and no prep scene, but now Shawn and the Mistress crew have brought the Nova back, this time with a bold new patriotic look and more power under the hood.

While the original looks for the Nova and the Camaro were both bright silver with pretty low-key, stock-style stripes and trim, the Nova is a drastic departure from that theme, and we ain’t mad at all about it. The Nova is rocking a bright green and dark grey fade/tearaway American flag motif that will make the car stand out in any crowd. One really cool touch that flows with the flag is the silhouetted soldier scene on the car’s rear wing to help drive home the patriotic feel of the car’s new look.

With a ProLIne 481X under the hood and larger turbo than before, the car is making a ton of power, so the tuner Hank had his hands full keeping the nose down as the car was trying to hike the front end up and carry it way down the track. While we don’t have any horsepower numbers, PLR’s venerable 481X with boost has been powering some of the quickest door cars in the country, so it’s pretty safe to estimate the power somewhere north of 3,000 horsepower.
The key, on any surface, but especially on a no prep style surface, is the launch. The team is focusing on getting the car to 60’ under power and going straight, and then bringing in power over the next 600’ to lay down some killer 1/8th mile passes.

As you can see in the video, the launches are a bit sketchy, but you can hear that the car is making some insane power and once they’ve got it going straight off the line, it will be more than a handful!

« The Million Dollar LaFerrari Takes On The Porsche GT2RS