The Million Dollar LaFerrari Takes On The Porsche GT2RS 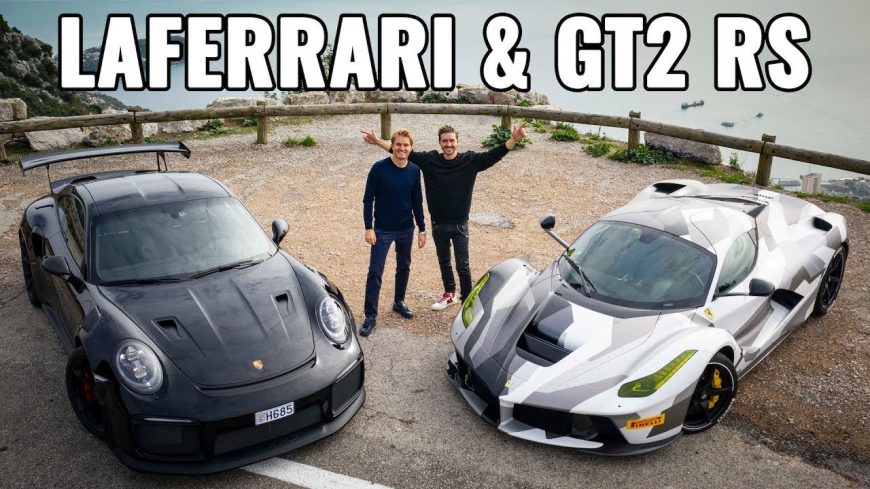 So I’ll go ahead and take one for the team and admit that the title of this video is a bit on the click-baity side. However, we simply took the title from Nico Rosberg’s vlog channel on YouTube, and to be fair, he did line up his Porsche GT2RS against this insane LaFerrari, so it’s not entirely misleading. However, we do hope the rematch, whenever it comes to pass, is better than the race between the two cars in this particular video.
While the title of the video seems to paint one picture, seeing Rosberg himself behind the wheel of the LaFerrari is actually what I would consider the focal point of this vlog entry. While the car’s owner, Ferrari Challenge champion Florian Merckx, takes Nico for a ride in the car to get him acquainted with the three million dollar ride, but when Forsberg slips into the drivers seat is when things really get exciting.
Slipping off his shoes to make sure he doesn’t scratch anything in the camo-wrapped LaFerrari, Rosberg does his thing, pushing the car through the narrow streets and taking some corners at speed to really get a feel for how the car grips the road. Despite being 100% road legal – it even has air conditioning, after all – the car gets a ringing endorsement from Rosberg as “absolutely wicked”.
After Nico hands the keys to the LaFerrari back to Florian, he jumps in his badass Porsche GT2RS to take on the Ferrari head to head, but a poor start – blamed on the poor flagman Charlie – ended the race before it really even got started. I’m going to assume they were only able to keep the roads blocked off for so long for the reason the rematch has to wait, but as we all know, that just means another awesome video is coming to Nico’s channel somewhere down the line.
Watch all the way to the end for a glimpse of Nico’s first attempt at drifting in the Porsche, something that while brief, is a thing of pure automotive bliss