Take a 200 MPH Ride Aboard A Nitro Dragster! 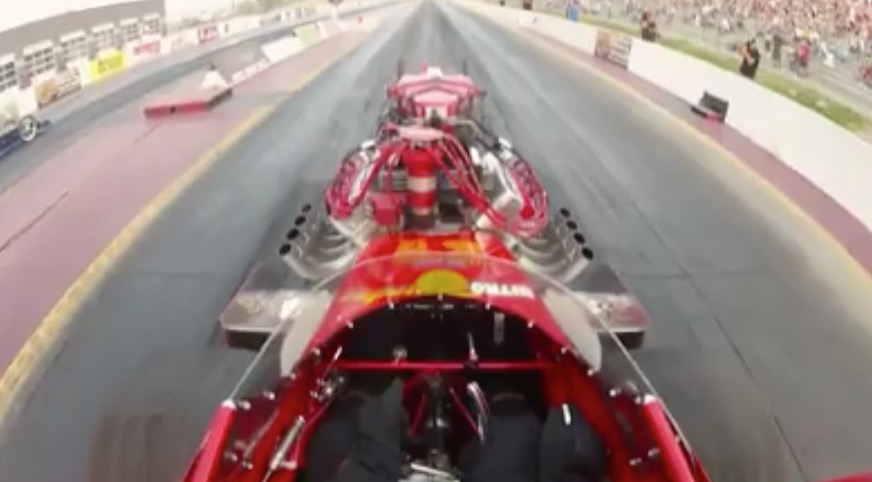 There are few things in the drag racing world more intense than driving a front-engine dragster. While modern top fuel cars are considerably faster and more powerful, the engine sits behind the driver, leaving them in the relative safety of the cockpit ahead of their 11,000 horsepower engines.

Even funny cars, which do have the engine out front, have evolved to include many safety features to keep the driver safe in the event of an engine explosion. While injuries in both classes can, and do, still happen, they’re both markedly safer than a front engine dragster, despite being 100 MPH faster through the quarter mile.

That said, there are still some men and women who like to do the old fashioned way, channeling their inner daredevil and gambler and climbing behind the wheel, and the engine, of nostalgia top fuel cars with the nitro-belching powerplant bolted right in front of their face. While these engines are quite a bit short of the 11,000 churned out by current top fuel engines, they do still crank out somewhere in the area of 2,500 and rely on the same volatile nitromethane fuel to reach speeds in excess of 200 MPH in through the quarter.

Unfortunately, we don’t have any info at all about the car or even a driver’s name, but we can tell you this massive blown HEMI does a great job of pushing this slingshot-style dragster down the track. I’m going to take a swing and guess that this is somewhere out west, possibly at the historic Bakersfield Dragway in Southern California.

If you want to skip the burnout and staging procedure – although I recommend you watch the whole video at least once – the launch comes right around the 2:40 mark. You can see the nose of the car wandering across the track as the engine sends searing flames high into the sky. This is what the drivers used to see, before engines were moved rearward to increase safety. You can’t tell me those few seconds aren’t intense!

« Crazy Rednecks Ties To Move A Mobile Home With His Pickup Truck. It Didn’t End Well