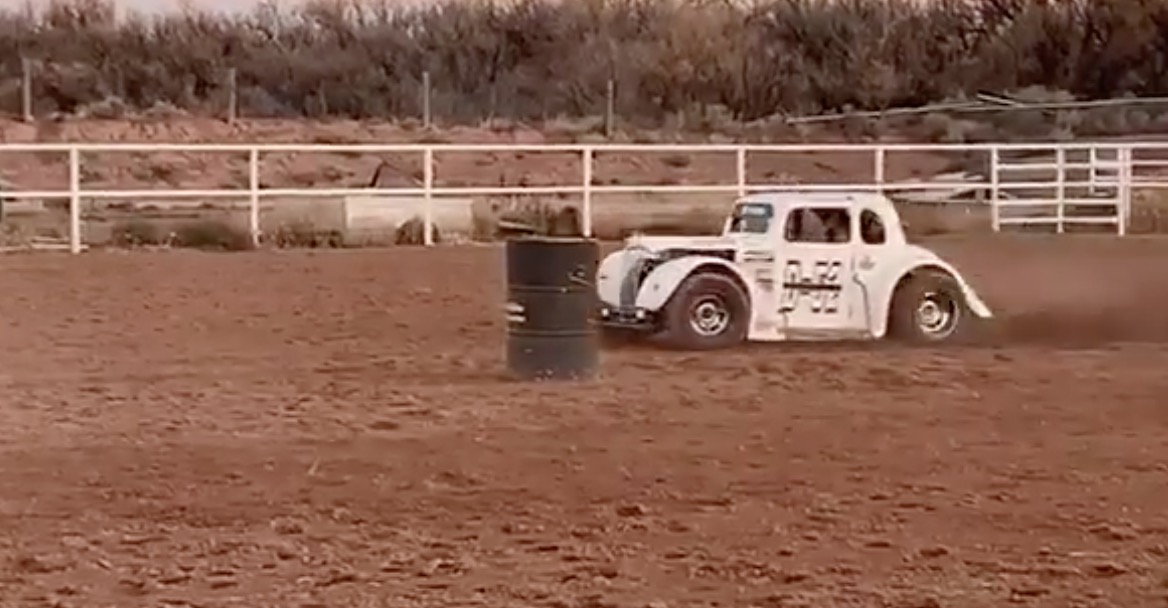 I feel like I’ve just discovered what could be the next big thing in both the world of dirt racing and rodeo. While I’m personally not a huge fan of either of those things, I am a casual fan of both, and I really feel like this combination of the two could be something truly outstanding.

According to Wikipedia, “Legends car racing is a style of race car, designed primarily to promote exciting racing and to keep costs down. The bodyshells are 5/8-scale replicas of American automobiles from the 1930s and 1940s, powered by a Yamaha motorcycle engine.” The cars are all “spec” cars, which means they’re mechanically identical and with very few exceptions, are kept that way to put emphasis on the driver’s skill to win races instead of the car itself.

Barrel racing is a rodeo event where female competitors racehorses around three barrels, completing loops around each as quickly as possible before sprinting to the arena exit to stop the timers. It’s easily one of the most popular events at any rodeo, and one of the most competitive forms of racing there is on the planet, with the winners often decided by fractions of a second.

Combining the two definitely seems like a marriage made in heaven. The rules for barrel racing are simple enough to learn and understand, and the legends cares are small enough to maneuver inside the rodeo arena without risking going out of control. While they’re plenty fast, they aren’t going to hit a very high top speed thanks to the placement of the barrels, so there really is very little risk of a crash. I honestly don’t see how this isn’t already a sanctioned sport, and I feel like whoever steps up and makes this a “thing” will be sitting on a gold mine.

Just be sure to remember where you got the idea, and at least invite me out to take photos at the events. I can’t imagine how cool the shots would be under the arena lights with a rooster tail of dirt flying behind these cars as they slide around the barrels!