Testing Out The Cheapest Touch Screen Head Unit on Amazon 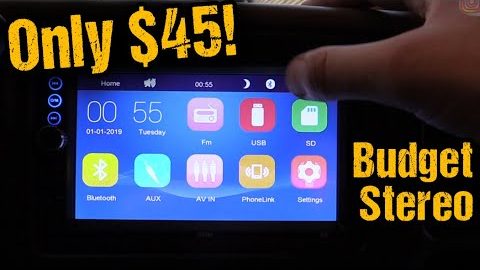 Technology in this day and age can do some amazing things. I think that I can speak for a wide range of people when I say that the functionality of Amazon is one of my favorites. With almost no limits, just about anything can be ordered on the website. The best part is that sometimes, it arrives in less than 24 hours. Long gone are the days where people actually need to go to the store for anything.

As it turns out, though, some products on the site are better than others. While Amazon tries to moderate what goes up, they can’t always guarantee a perfect outcome. With this in mind, sometimes junk might be able to end up in the hands of customers. However, with the stout competition on the platform and wide access, we’re able to get some quality offerings at a better price than we’re used to.

This time, we follow along with a BigKleib34 video that takes the liberty of upgrading a car stereo. As it turned out, the original head unit in the YouTuber’s 2005 Chevrolet Tahoe wasn’t exactly modern. Instead of dropping a fortune on the latest head unit, he would turn to Amazon to save a buck. Hopeful that the unit would be good, he created a video to review the radio and its features. He remarks that it started out as something resembling a joke. There’s no way that a $45 radio could be any good. Right?

Well as fate would have it, the unit would end up delivering a rather large bang for his buck. As the opinion piece goes, this one might have just been a competitor for some of the more expensive units on the market. Would it be perfect? Well, no. However, for $45, he proclaims that it certainly is something worth looking into!