The Cutty from Street Outlaws Making a Fast Pass! 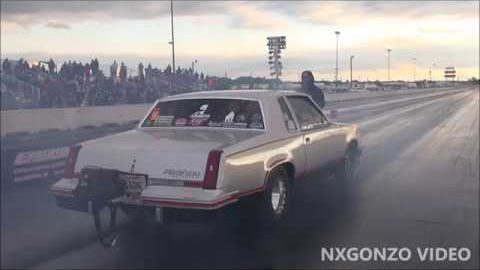 It’s been a few years since we’ve seen Andrade and The Cutty on Street Outlaws, but that hasn’t stopped the evolution of the car from a fairly stock style setup to a wicked boosted hotrod that runs very strong!

Andrade stuck with the small block, though he decided to use the LS-style platform and add some boost instead of juice, bolting up a single snail to feed the powerplant all the air it can handle.

The car spent some time on bigger tires, but Andrade made the swap to radials and has had great results, so he’s been riding on radials for a while now. In this clip, the car launches hard alongside the beautiful X275 Camaro of JD Campbell at Northstar Dragway and streaks to the finish line to take the win, dumping the chutes to help bring the car safely to a stop on the top end.

Andrade has said he doesn’t know if he will ever make a run at the list again, but with The Cutty running this good, he just might have to take a shot and getting back on the Top 10!