The Difference Between a Harley Davidson And A Hayabusa! 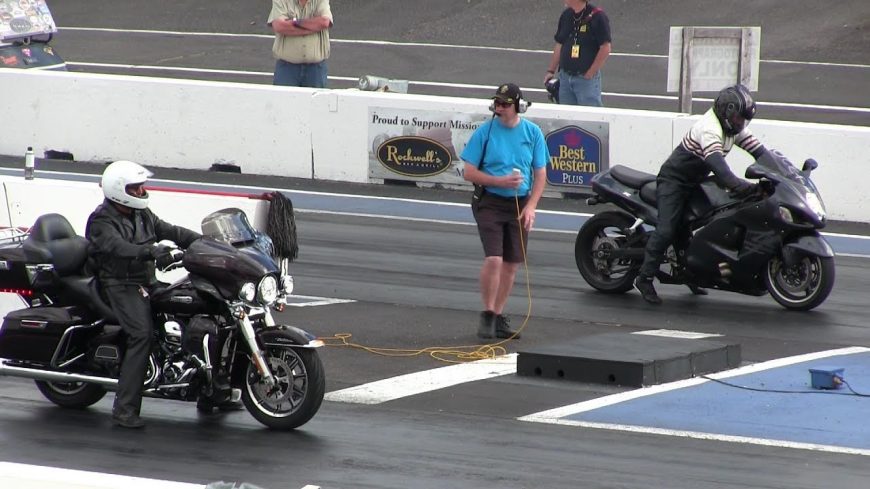 When you take a look at a Harley-Davidson and a Hayabusa motorcycle, you obviously know that these are two very different beasts indeed. While the Harley might have been designed for something along the lines of cruising through the streets, playing a little bit of music, and having a nice, smooth ride, on the other hand, the Busa was definitely designed for speed. Make no bones about it, the Hayabusa will completely eat the Harley’s lunch and that’s not necessarily a bad thing. Sure, your Harley might have a little bit of kick behind it but when you purchase one, your intention isn’t necessarily to go out there and be the king of the race track, either.

Now, I think we’re on the same page that a sport bike like a Hayabusa will outperform a Harley-Davidson but, curiosity really got the best of us when we came across this video that would compare the two. Just how different are these two machines when it comes to what’s happening on the drag strip? We know that the Hayabusa will be faster but by how much? It’s these silly little questions that tease our minds as we lay restless at night, making us wonder exactly how these two bikes would stack up against one another and this time, we finally get the chance to see it with our own two eyes.

Follow along in the video down below that allows these two machines to go to battle in a quarter mile of the racing surface. After checking this one out, be sure to tell us what you think of how these pair of machines stacked up against one another. Did you expect this to be a closer race? Perhaps you expected the Hayabusa to run away with the victory even more. The outcome might’ve been one that was expected by all but, on the other hand, it could certainly stir the discussion pot as well.

« The Most Expensive Gas Station In America, But Why?