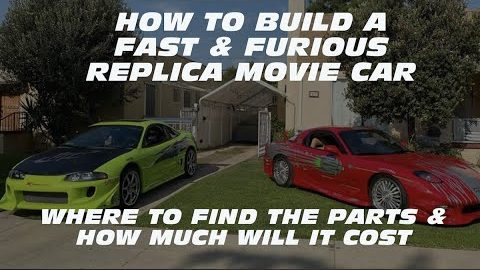 When we take a look back of the Fast and Furious movies, sure, the franchise has stood to launch several acting careers into the realm of superstardom. In collaboration with the franchise, names like Vin Diesel and the late Paul Walker have become some of the most iconic in Hollywood history. However, alongside the massive names associated with the series, we find automobiles that have become just as iconic as those behind the wheel. In fact, we might even argue that the cars are just as big of a deal as the stars many times.

Because of that, there has been quite a market for these movie cars following the films. Man collectors abroad think that it would be a good idea to add these relics to their collections. How cool would it be to walk into the garage just to see one of your favorite movie cars sitting there to enjoy?

As it turns out, though, there are only a limited number of these machines able to be distributed. Naturally, there are only so many that were made to be used in the films. Therefore, as we have seen with many other vehicles before, fans of the series have turned to the replica world to satisfy their need for Fast and Furious speed.

Down in the video below, we get a first-hand record of what exactly it would mean to truly build a replica. Sure, somebody could be inspired by the film but creating a true replica is another experience entirely. In order to break it all down, Craig Lieberman, the guy responsible for many of the car decisions in the early movies, tells us exactly what it would cost to build a replica and how one would go about finding the parts. As it turns out, something like this isn’t quite as easy as slapping a couple of decals and a body kit on a car.