I’m not sure if this is a widely spread sentiment or if me and my friends are ...

I’m not sure if this is a widely spread sentiment or if me and my friends are just incredibly big nerds but personally, we have been incredibly excited about the coming of the Jeep Grand Cherokee Trackhawk. The SUV is ready and willing to pack a punch of 707 supercharged Mopar horsepower, a number that should sound familiar to you if you remember being pelted with the endless marketing for the Hellcat lineup that was repeatedly shoved down our throats. For some reason, we just couldn’t resist the thought of seeing this big and burly forced induction v8 being launched with reckless abandon with all four wheels throwing power to the ground in a Jeep’s body.

Now, with a starting price of $85,900, this thing is kind of ridiculously expensive, even for the SRT nameplate. In addition, that’ll only account for the MSRP but also, you want to think about all that money that the dealerships are to be pocketing when they mark these things up. In that aspect, it’s probably not something that’s going be very comparable to the Chevrolet Camaro SS and Ford Mustang GT. However, when you consider the fact that this thing is about as aerodynamic as that 15-year-old refrigerator in your garage and probably comes with that good old fashioned Mopar stamp of “this thing weighs way more than it probably should,” the results that come about are wickedly impressive. If you don’t agree, you’re probably sipping on some steaming hot bias soup.

Now, this head-to-head is a little bit like comparing apples to oranges but that’s the fun part! Even at an entry-level format, you would think that V8 powered pony cars would be able to overpower just about any SUV on the market. However, when you’re able to finally sink your teeth into what the Trackhawk is able to accomplish out there on the strip, you see it head down the quarter mile in just 11.89-seconds at 114 mph and those are real world numbers, not just some test that a friend of a friend might have read about. In the scheme of things, with pretty much every racing vehicle that you see on the track busting into the single digits and then some these days, it can be easy to get lost in just how impressive that 11-second pass is but, when you take a step back and look at the entire market, there aren’t too many SUVs that are even close to what this one just accomplished straight out of the box.

Down in the video below, TalonTSi97 is on location with the cameras rolling and is able to capture a Trackhawk testing in the wild as Road and Track Magazine got their hands on the beast and made a couple of passes down the strip at Atco Raceway, managing to muster up this high 11-second quarter mile time. It’s going to be incredibly interesting to see how far these things will come by the time that they start falling into the hands of consumers. Will the performance SUV be able to make its way back into the mainstream once again? I guess that only time will be able to tell that story, but for now, I think that we’re more than satisfied with what this thing has been able to accomplish. 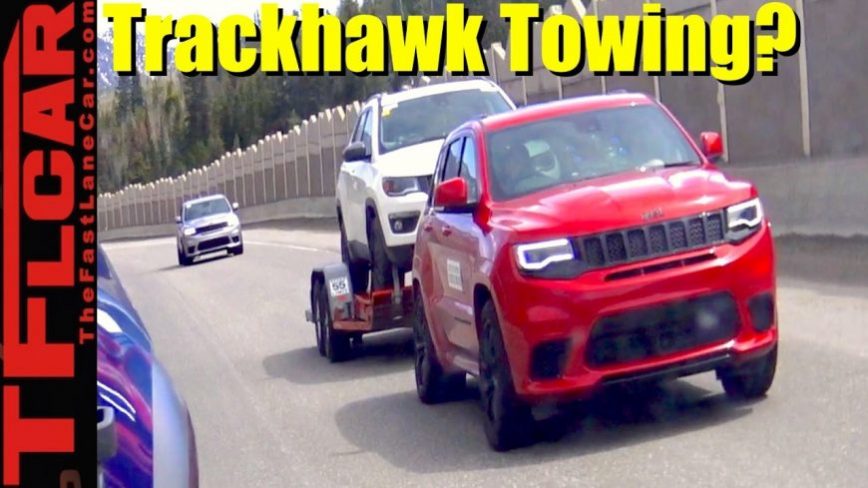