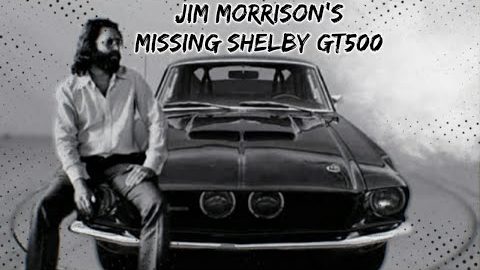 The name “Jim Morrison” is synonymous with being a true rock ‘n’ roll icon. The lead singer of “The Doors” definitely found his way up the hot list to become one of the most iconic rockers of all time. Almost as iconic as his career, though, unfortunately, would be the subject of his untimely death. Morrison passed away at the age of 27 and all these years later, there are still questions about what exactly happened. One of those stories surrounds his Shelby GT500 which has been missing ever since.

Ever since the passing of Morrison, the location of the 1967 Shelby has been a mystery. The car itself was rather rare. The 67 was one of just 47 examples created in the year and color combo that Morrison had chosen. Therefore, we would venture to think that it would be rather easy to identify if someone had found it. The stories of what eventually would happen to the car have been the subject of folklore ever since Morrison’s passing.

The most popular story goes that Morrison was involved in an accident when he was on his way to a local social club. Apparently, the story says that after getting in the accident, the rock star simply left the car behind. From there, we would be left to assume that it was picked up by a tow truck company and probably auctioned off, if that was the case. Another variation of this story says that perhaps the car was crushed after such an outing due to how damaged it could’ve been.

This isn’t where the potential stories end, though. Another story tells of the car being left in a parking lot when Morrison would head to Paris. This is where he was said to have died but conflicting stories and no autopsy have fans wondering how accurate those details were. If that were the case, though, it could stand to reason until the car had eventually been towed from the lot where it was left.

Last but not least, there are some who even believe that Morrison faked his death. With this rendition of the story, the Shelby would end up going with Morrison and that’s why there hasn’t really been a record of it since he passed away.

Which version of the story is the most believable truly depends on who we might ask. The one thing that is for sure is that nobody can say with certainty that they know exactly what happened to that famed 1967 Shelby. If someone does know, they certainly haven’t spoken out about it.

« Farmtruck and AZN go Back in Time With an Unlikely Build