The Story NBC Would Like to Forget: the Repressed Embarrassment of NASCAR vs Dateline 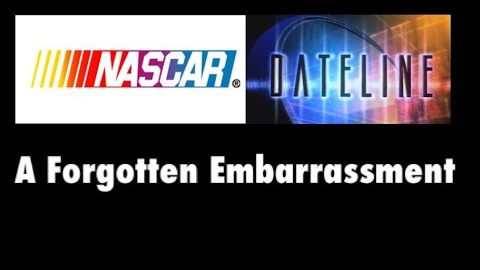 Before we begin, we have to say that this is definitely a story that should be prefaced with the fact that it happened 13 years ago. We would love to think that things have changed since then because what we’re about to divulge upon is nothing short of a black eye for journalism. However, there’s certainly a lot that can be learned with something like this as we navigate toward the future.

It all happened shortly following that date that we all starkly remember on 9/11/2001. Tragedy struck the nation and for many of us, panic had set in, leaving us to wonder if our personal safety was in jeopardy after the terrorist attacks that had brought down the World Trade Center. At the time, with the faces of the Muslim extremists behind the heinous attacks were plastered all over the place like an air of anti-Muslim sentiment set in around the media during this time. Whether this anti-Muslim sentiment was actually something that your average American would take to heart is a debate for another time. What’s important in this story was the fact that it was shortly thereafter that NBC would strike and try to take advantage of this situation by opening up a can of worms that left most wondering if the scenario was satire and finding themselves in awe when discovering it was a reality.

In an attempt that looked like a blatant race bait with a report that NASCAR would later call “outrageous,” NBC confirmed that it planted what they called “Muslim-looking” individuals at a NASCAR event in Martinsville, Virginia. The aim was to capture the reaction of the people at the event to these men. Essentially, the idea seemed to be a shot at creating their own news.

In contrast to the reaction that NBC was probably hoping for, people at the event didn’t seem to mind at all or even really acknowledge the men as being any different from any other spectator at the track that day. Instead, though, the story that NBC would go home with would be that of NASCAR’s heated reaction to NBC planting these people in the audience. It would seem to be one that was entirely justified as it seemed to stereotype NASCAR fans into a box that we’re sure not too many folks would like to be in.

A NASCAR spokesperson reacting to finding out about the report stated that “It is outrageous that a news organization of NBC’s stature would stoop to the level of going out to create news instead of reporting news,” continuing that “Any legitimate journalist in America should be embarrassed by this stunt. The obvious intent by NBC was to evoke a reaction, and we are confident our fans won’t take the bait,” ESPN reported on the 2006 incident.

In response, from what we found, there was never an apology on record from Dateline or NBC who instead insinuated that they would be continuing their research and that they were “pursuing this story in a fair manner.” This would snowball to create a long time divide between NASCAR and NBC which has since been forgotten about as the two had joined hands once again in 2015. NBCSN is slated to cover all of NASCAR’s playoff races this year in addition to the final 10 races of the “regular season,” making up just about half of the total schedule.

So, why does any of this matter?

In a day and age where quick access to information is paramount in reporting, it’s quite easy to find factual errors in many areas. This isn’t to say that news sources aren’t to be trusted as there are certainly good places to gather information. However, sometimes, stories should be taken with a grain of salt because we can never truly know when ratings are more important than representing the truth. This is an idea that NASCAR busted wide open once upon a time, teaching us an important lesson all of those years ago.

« Breakdown Of Tesla’s Autopilot System Attempts to See If It’s Worth $5,000 Asking Price