The Strangest Moments in NASCAR History 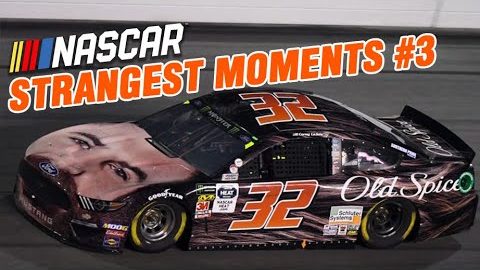 When it comes to things that fans enjoy most about a race, the unpredictability certainly has to be up there. At the end of the day, that’s why they go out there and actually race instead of just accepting what the oddsmakers find to be the most probable. There are countless scenarios that could unfold on the track that could end with countless results. Who knows when one driver is going to get out of their lane either literally or figuratively, causing the entire pack to get mixed up?

During the course of a NASCAR race, nobody likes to wish for failure. However, when something crazy does happen and cars end up going sideways, fans can’t help but have their eyes glued to the screen. This is why, over and over again, crash videos end up yielding the highest view count on platforms like YouTube. However, crashes aren’t the only obscure and unexpected situations to happen during a NASCAR race.

Every once in a while, somebody might experience what we in the industry like to call a “Brain fart.”

Perhaps, a driver or emergency team member just wasn’t thinking and it could lead to some pretty crazy and outlandish situations. Perhaps it’s something like a sign getting attached to a car as it gets too close to the wall which causes the car to carry the sign around the track like a custom advertisement. On the other hand, maybe the ambulance came out when it wasn’t supposed to, rolling onto an active racing surface and causing a caution flag to come out.

Sure, these situations might not be a part of a normal race but their obscurity is what makes them more interesting to look at. By following along with the video below from MMCS, we get to join in on those situations to see what really makes NASCAR fans scratch their heads.