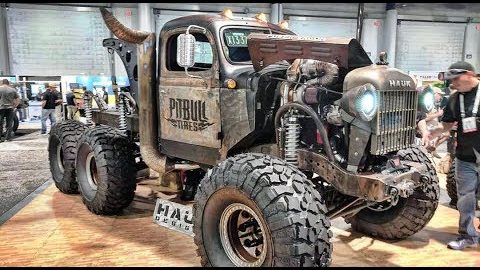 With most of the racing world winding down for the season – yes, Florida and South Texas, we know you guys race through the winter! – we know this means it’s that time of year where we start seeing new plans for next year. Each year, the first week of November is marked on everybody’s calendar with 4 simple letters: SEMA

If you haven’t heard of the SEMA (Specialty Equipment Market Association) Show, it’s a massive trade show that brings together automotive aftermarket manufacturers, OEM manufacturers, wholesalers, retailers, and media for a week-long convention in Vegas. It’s often used to unveil new parts and components, technology, and is a showcase for countless custom car, truck, bike, racing, and offroad builds. This video features nothing but fifteen solid minutes of badass trucks, built by vendors, retailers and enthusiasts just for the show.

Each year we see SEMA builds that just get more and more over the top, especially in the ever-growing truck market. With so many drastically different approaches to take with a truck build, there are quite literally countless options for somebody looking to make an impact at SEMA, but that also means they have to take things to the extreme and truly build something unique and mind-blowing.

Out of all of the trucks featured in this video, a couple really jump out to me as fitting that criteria. The first one that really caught my eye can be seen at the 2:37 mark. This Ford Super Duty dually features one of the coolest new suspension products on the market; a setup that allows you to control the ride height from a key fob in your pocket. This great looking truck can be adjusted in seconds to sit at a nice low level, or with the push of a button, it can be jacked up nearly a foot higher!

The other one that really jumped out at me as a unique build was the Pitbull Tires wrecker. I can’t even begin to guess what this monster started life as, but it reminds me of the BEATNGU truck from Jeepers Creepers. This six-wheeled behemoth features a custom wrecker boom, bullhorn exhaust, and an insane compound turbo powerplant that likely cranks out massive horsepower and torque numbers.

Don’t get me wrong, there are many more insanely cool builds in this video, and we’ve long since established that everybody has their own tastes, so hit that play button and let us know what trucks stand out to you as the coolest from the 2018 SEMA Show!

« This Classic Buick Is One Of The Best “Sleepers” You’ll Ever See!