In this day and age, sometimes, it can be rather difficult to stay positive about the ...

In this day and age, sometimes, it can be rather difficult to stay positive about the nature of our fellow human beings. No matter which way we look, there always seems to be someone attempting to pull a fast one on someone else in order to benefit themselves. With this, it can be easy to really build up a wall and be skeptical of the next person’s intentions.

However, it is very important to remember that there are still people who care about one another and the integrity of different establishments. For example, in the racing community, good sportsmanship is really something that we find over and over again. Sure, in some instances, there will be people who are going to just take for themselves. However, in other situations, we find racers that really respect the sport and are willing to help out their competitor if it means upholding their own integrity.

This time, we check out one of those situations that definitely restores a little bit of our faith in humanity.

The action comes from an event by the name of “Dig or Die.” The no prep event is one where competitive spirits are high. However, as this particular situation shows, sportsmanship was in full effect as well.

At one point during the event, a pair of pickup trucks pull up to the line. One team was led by driver, Butch Hall, from New Jersey. The other was behind driver, Wes Ervin, out of from Delaware.

Apparently, the team from New Jersey had a slight issue that would appear to be related to a hanging exhaust. Naturally, they wouldn’t be able to run down the racing surface with such an issue. If someone could’ve gotten under the truck to yank the hanging exhaust off, the truck would’ve been perfectly fine to make a pass. However, the piece of pipe seemed to be hung up in such a way that there wasn’t enough clearance to yank it back out.

This is a situation where, if Ervin just took off and took the win, nobody would’ve blamed him. After all, being able to get to the starting line with a fully functioning vehicle is a part of the race. However, instead of just taking the win, realizing that it was a simple fix for team New Jersey, team Delaware actually took it upon themselves to help their opponent.

In the effort that really shows us what the racing community is all about, members of team Delaware ran over to the truck from New Jersey and helped to pick it up off of the ground, allowing the piece of exhaust to be removed from under the truck. Following this display of sportsmanship, there would be a completely fair race.

Unfortunately for team Delaware, they wouldn’t take home the win. However, sometimes, there are things that are more important in this life than winning. If anything, I think that a lot of people could definitely take notes from a situation like this and try to implement the same mindset into their own personal lives.

Below, the crew from DNR Auto was on location to catch the moment as it unfolded. 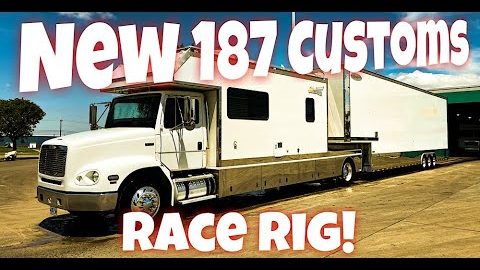