The Wackiest Turbo Setup That You’ll Ever Lay Eyes On 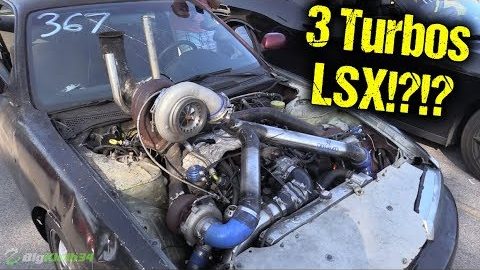 When it comes to the LS engine, it seems like they really jam this thing in just about every platform you can possibly imagine, even some of those that don’t have wheels. However, when it comes to making your swap stand out from the next, sometimes, it can be a little bit challenging to do, however, I don’t think that would be an issue for this Nissan 240SX that boasts such power with not one or two, but 3 turbos. Yes, you read that correctly. This is truly a setup that we would consider to be incredibly unique in a world of swaps that seems all blend together in some way or another.

This time, the action comes at us from Street Car Takeover as the series invades Beech Bend in Bowling Green, Kentucky, with a wide variety of cars but in the sea of machines, this Nissan really stuck out just as much as the turbo that was sticking out of the hood. While, on the strip, it would appear as if the driver was trying to figure out exactly how to get this thing to work properly in a drag racing application, we have to admit that when checking this thing out in the pits, we were rather impressed by the way it was all set up and the numbers that this car is able to claim to as the owner says that he thinks it should crank out somewhere in the ballpark of 900 hp.

If you follow along down in the BigKleib34 video below, you’ll be able to check out the Nissan that has only V8 hiding out under where the hood used to be but also a basketball sized turbo that catches your eye up front which is then accompanied by two more. There’s certainly a lot to look at here and it’s really the builds like these that make being a car fan incredibly fun. After being able to sink your teeth into this one, be sure to tell us what you think of this true one-of-a-kind machine.