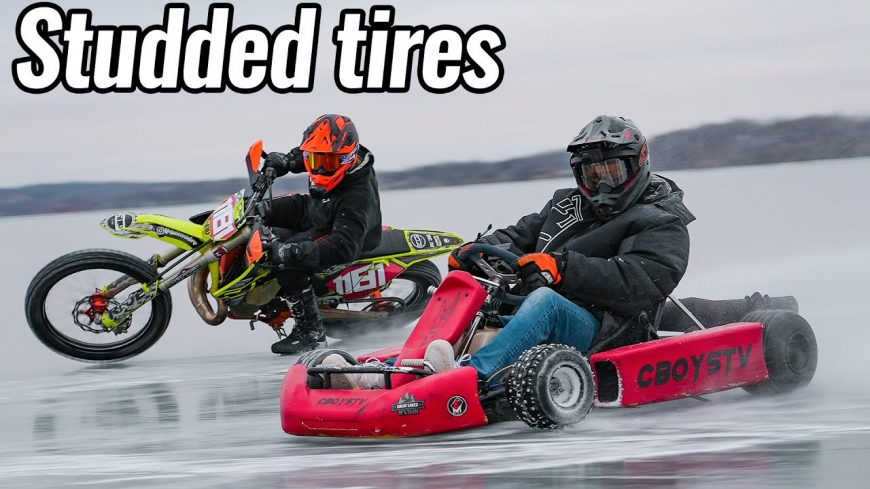 For some gearheads, the coming of cold weather might spell out the end of their fun-having season. Perhaps, when the snow starts to fall, it’s time to begin to do a little bit of work and maintenance. Maybe some will even hibernate for a little bit and just come out when the weather warms up again.

However, there is a completely different breed of enthusiasts who will take it upon themselves to have fun no matter what the weather. In fact, they might have different toys and accessories that provoke this fun in any season of the year.

This time, we check in with a couple of guys known as the Cboys who probably find their way into the latter category. This time, they break out a shifter kart and a dirt bike but these things are fitted with some equipment that makes them a little bit more fun for the winter.

Instead of a traditional tires setup on these machines, they break out the studded tires. With that, the crew heads to a frozen lake to have a little bit of fun on the ice. Even though they claim that it’s thin ice, these madmen are wide open throttle all the way, ripping through the winter wonderland on their way to a little bit of adrenaline.

By following along with the video below, we get to drop in on the action for ourselves. Just being a spectator here is really enough to make us want to get up and go grab one of these toys for ourselves. There’s just a certain appeal about ripping around on the ice that looks like a ton of fun. When you really think about it, this is basically the adult version of breaking out the sled when the snow starts to fall. Let’s just say that the intensity is cranked up just a little bit to make this even more fun, though.

« WhistlinDiesel Totaled the Monster Max, He Really Did a Number on This Thing