This F-16 Fighter Jet Almost Seems as if it Defies Gravity, Flexing Skills After a “Touch-and-Go” 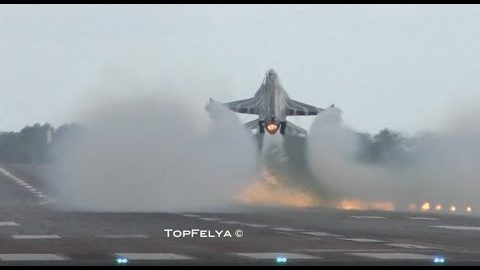 After all sorts of training, fighter jet pilots have a way of looking like they defy gravity. Surely, there’s some sort of engineering equation that can explain how some of these machines work. However, it’s always difficult for the untrained brain really be able to process it all. As these pilots yank their aircraft through the skies, we never know what’s coming next as they really can put on a show from time to time.

This time, we get to tune in with a display that goes airborne! The creator, Topfelya, captures the likes of an F-16 as it hurls its way through the air. As the fighter jet makes its way toward a landing strip, eventually it performs what’s known as a “Touch-and-go” which is exactly as it sounds. After coming down and brushing up against the runway, though, the machine is back up in the air, going nearly vertical.

As if going straight up into the air and pulling over backwards isn’t enough as the plane heads upside down, things get even more intense from there. Following the impressive takeoff, we see a couple of barrel rolls that really get the adrenaline flowing. For this pilot, it’s probably just another day in the office. We’re sure that he or she has done this a handful of times at least. However, for those of us standing here on the ground, we can’t help but have our jaws nearly on the floor.

By following along with the video below, we get quite the view. As we get an adrenaline rush from being able to watch this all unfold, we would imagine that being in the cockpit is really a feeling that’s second to none. There’s something special about a display that can almost make one feel weightless, even from this side of the screen!

« Which 10 “Fast and Furious” Cars Were Actually the Fastest?