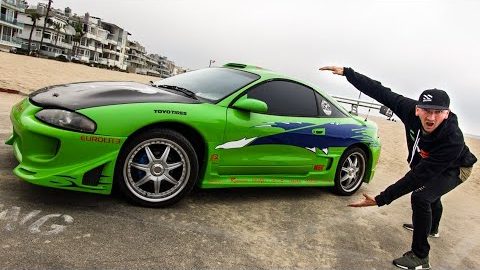 In 2001, the world changed for car guys and girls with the release of one of the most iconic car movies of all times. Vin Diesel, Paul Walker and company brought us into the world of The Fast and the Furious.

Looking at where the franchise is now, some 8 blockbuster films later, the original movie seems almost like a low-budget indie film. That certainly wasn’t the case, though, and the original movie gave us more than its fair share of timeless pop culture references. From Dom’s gravelly “I live my life a quarter mile at a time,” to Brian’s almost-giddy “I almost had you!”, the film changed the way many of us look at cars in general.

Perhaps more iconic than the lingo, however, was the styling of the cars themselves. While the sport compact movement was already well underway, the over-the-top treatment given to the cars in the first FNF movie sent that whole niche into overdrive and set off an explosion that swept the nation and the world.

The already-beloved Supra became the “hero car” to the entire world, while the Mitsubishi Eclipse became as sought after as any car on the road. Big wheels and even bigger wings became the norm, huge exhaust tips and admittedly gaudy graphics popped up on otherwise-stock Civics, and the list goes on. Most of you were there and saw at least some of this, so you know what I’m talking about.

Dave from Daily Driven Exotics caught up with Franck from Movie Car Central to check out one of his latest acquisitions, an incredibly accurate remake the Paul Walker’s green Eclipse that Johnny Tran’s crew shot all to hell. They take the car for a little cruise through Venice Beach, where onlookers obviously gawk over the Eclipse like crazy.

This is just one of Franck’s many movie cars, more of while we will likely see on the DDE channel in the future. Check back to see more from one of our favorite channels!

« Sarcastic Reenactment Of Fast And Furious Final Scene Is A Must See!