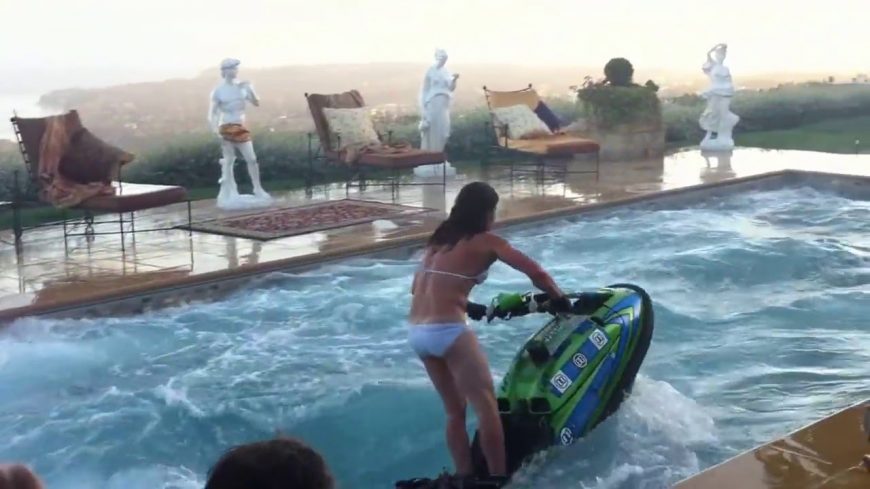 If you ask a variety of different people what their definition of a party is, I’m sure that you would get some very different answers. While some might think that a party is just a bunch of people with some music involved, others might take it to another level and really picture a party as something that you’d see in a movie about college frat house. Meanwhile, others envision their party being a something like what we have pictured here as a bunch of people seem to be huddled around as a pilot for reality television show is being filmed with the star of the show also being the centerpiece of this party as a man wearing a bikini, for one reason or another, pops on a jet ski and goes at it in a pool.

Now I’m sure that a jet ski has probably been tossed in the pool at a party before but what this rider is doing kind of takes it up another notch. Some might have simply been dabbling around, firing the jet ski up in the pool and maybe spraying some water but instead, this party goer decides to put some athletic ability on display as he uses the most of his muscular build to be able to pull that ski all the way around, doing backflips from a standstill

If you follow along with the video below, you’ll see what one person’s version of really getting a party started looks like as he is sure to put on a show that the guests will never forget. I’m not sure about you guys but I can’t personally say that I’ve ever been to a party where someone started putting on an acrobatic jet ski routine in their swimming pool. Something like that is definitely what will keep the guests coming back and wanting to see more.