This is Why You Don’t Piss Off Your Neighbors… Diesel Power!

This is Why You Don’t Piss Off Your Neighbors… Diesel Power!

When we walked into this video, we really didn’t know what to expect. Without ...

When we walked into this video, we really didn’t know what to expect. Without very much backstory given, we would have to assume that, after laying eyes on this one, that there is some sort of sour relationship between this diesel truck owner and his neighbors, if the title were something that would give us a hunch. It’s not exactly clear what the issue here is but, how one neighbor tries to go about “Solving” (making it worse) the issue Is clear. It appears as if when this guy got sick and tired of going back and forth with his neighbor, well, he decided to the hop into action.

In the clip that we were shown, it’s clear that the neighbor isn’t too happy when this guy rolls his Powerstroke back into the street and rips off a huge burnout, laying down some thick black marks and sending all sorts of black and white smoke into the air with the aim of what we would assume to be really irritating those that live next door. As you can hear after the burnout, there are also some more words exchanged that really seem to not make anything better, either. At the end of the day, I don’t think that I would want any of these people to be living next door to me.

Follow along in the video below as we watch what appears to be a blatant attempt to irritate someone next door. Whether or not they had provoked this diesel attack is yet to be seen but the retaliation is oh so real, under any set of circumstances. After watching this one for yourself, be sure to tell us what you think of this friendly neighborhood activity that was all caught on video. Something tells us that if there is an outstanding issue between these neighbors that there isn’t really a resolution in clear sight.

Guy in Go Kart Runs From Cops in his Nieghborhood 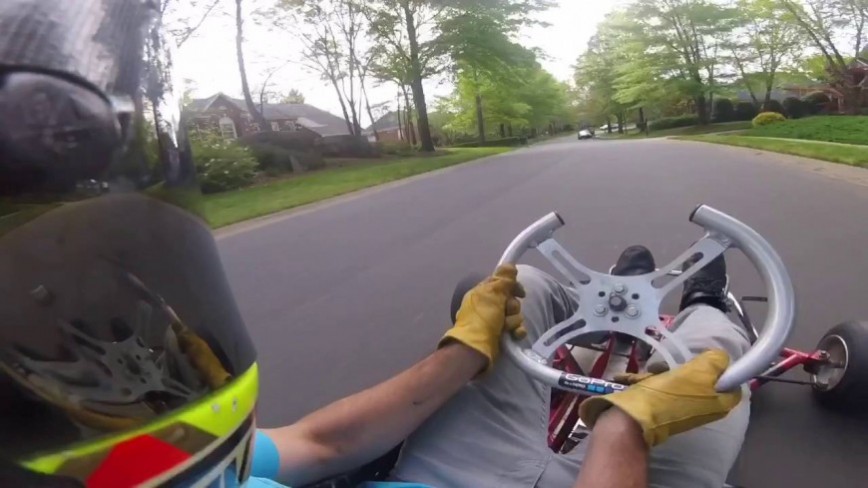