Throwback Thursday: Cruz Pedregon Has One Of The Craziest Runs In Funny Car History 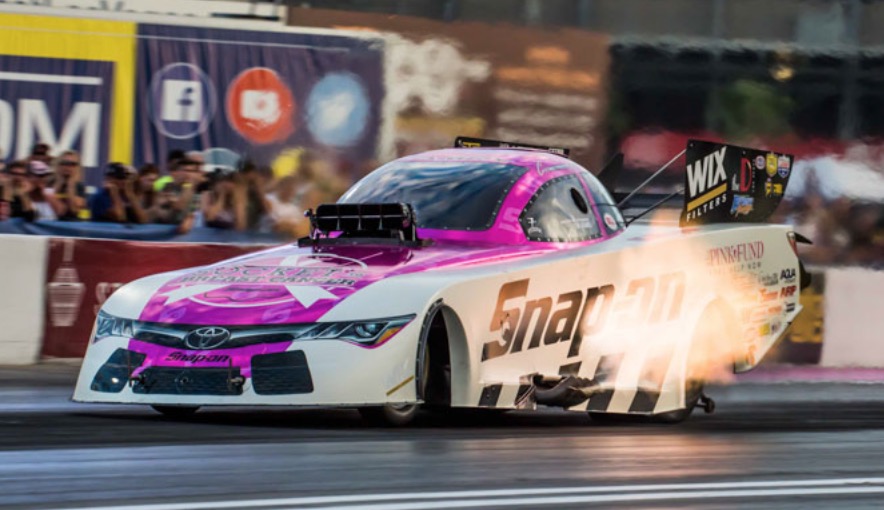 Two time NHRA Funny Car world champion Cruz Pedregon has been on some wild rides throughout his long and successful career. However, this several-hundred-feet-long downtrack wheelstand from the 2016 fall race in Las Vegas could very well end up being the clip that “The Cruzer” is remembered for.

Racing against tough competitor and fellow multi-time world champion Robert Hight, Pedregon staged his Toyota Camry and blasted off on what looked to be a picture perfect run, at least until he got to half track. As the clutch locked up and all 11,000 horsepower were applied to the massive rear tires, the nose of the car lifted in what can only be describes as a half-track liftoff. The body of the car, a lightweight composite shell, became more like a Toyota-shaped parachute at that point, catching the air and keeping the car up off the ground and very nearly gliding for some 400 feet or so. The car’s wheelie bars were the only point of contact with the ground for a time, and likely kept the car from tipping to one side or the other and crashing.

Instead, the car stood up, flew, and returned to earth rather gracefully, although the impact of falling from several feet in the air in a car that has only the air in the tires for suspension looks to have put Cruz’s back in a bit of a pinch, as you can see when he climbs from the car.

However, I believe Pedregon and everybody else who has seen this video, which has now been viewed almost 1.7 million times, knows just how lucky he was that the car remained steady and didn’t end up in much worse shape. We’ve all seen footage of what happens when a car flips completely over, and these crashes always start out about like this one, but end in much more carnage and are more likely to result in injuries. I’ve yet to see another car do this at any point in the almost 3 years since this run took place, leading me to believe it was just a freak incident that may never happen again.

One of the craziest runs EVER happened last year at the #ToyotaNats when Cruz Pedregon had this epic wheelstand. #tbt

« Meet The Largest Cruise Ship In San Diego. Diverted Because Of A Hurricane