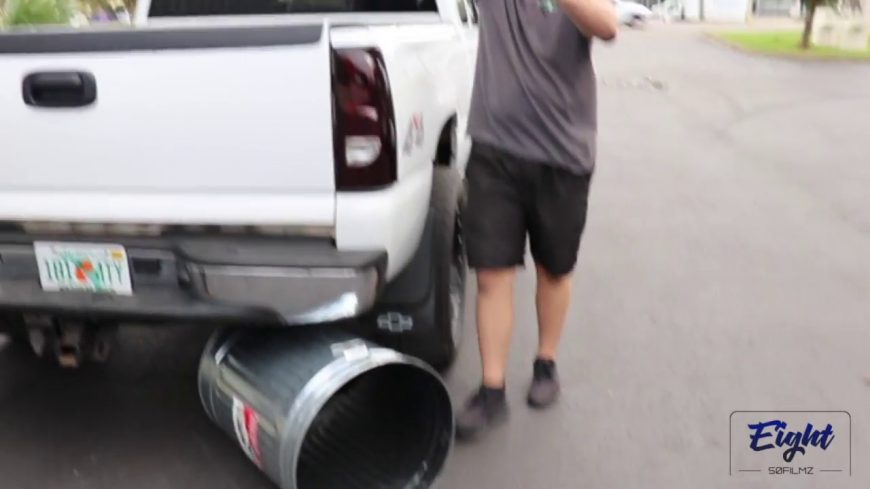 For some reason, when you look at some of the ridiculous modifications that have caught on these days, some people who get their hands on diesel pickup trucks really manage to go above and beyond, trying to standing out. One of the trends that is completely over-the-top and has managed to catch on somehow is that of a ridiculously huge exhaust tip. Many of us can’t figure out what’s so appealing about having an exhaust tip the size of a trashcan but apparently, some people really like this trend as it has found its way to tons of trucks across the country.

This time, we stumbled our way upon some somebody who seems to think the same way that we do about these massive trash cans exhaust tips and is out of the make a parody of the whole issue by actually taking a real trashcan, cutting a hole in it, and making it fit just right over to their exhaust. It’s pretty funny to watch as these friends find themselves a can that will fit just right and install it to spec, complete with the bungee cord to hold everything in place as they roll down the highway with this trick Chevrolet Silverado powered by Duramax that will be turning heads in no time.

Follow along down in the video below that will take you for this journey that has these guys modifying the Duramax just like everybody else these days. We would love to hear what you think about such a modification. Heck, you might be one of those people who thinks that a massive exhaust tip on a diesel looks attractive for some reason. Whether you love it or hate it, we’d love to hear what you think of this phenomenon that seems to have been spreading around the diesel community like the plague.