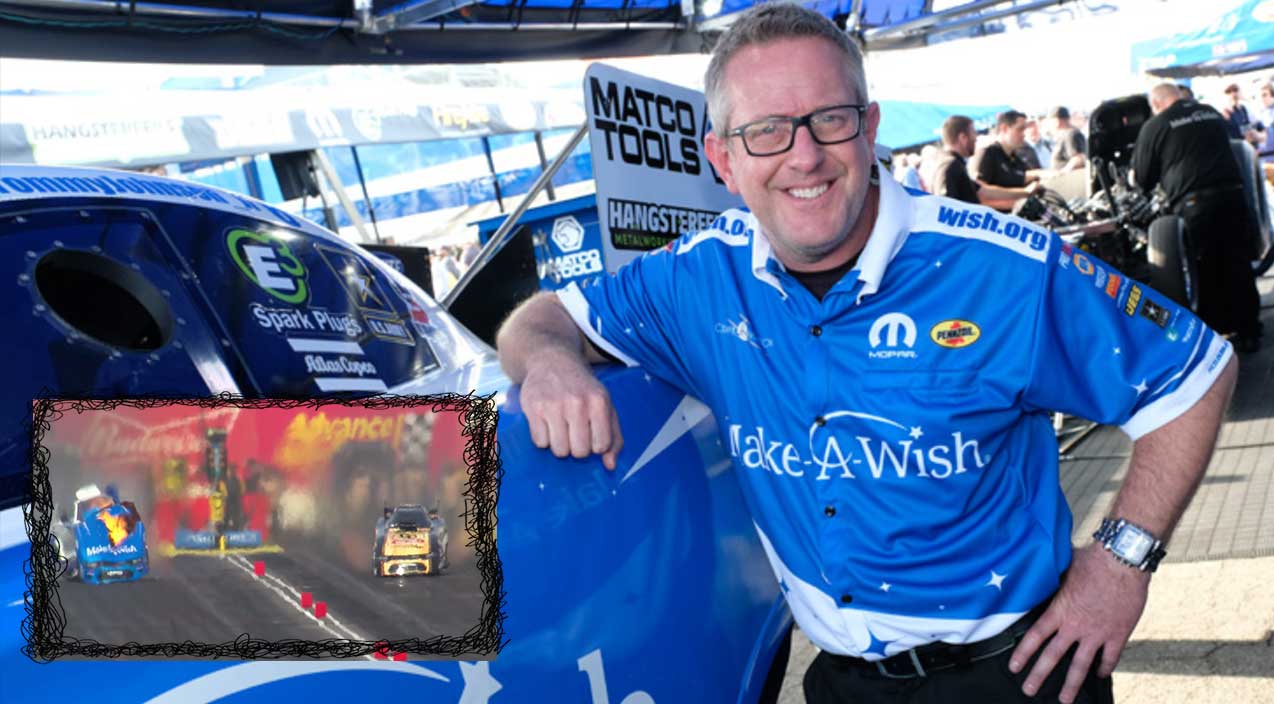 Yesterday’s Magic Dry Organic Absorbent Arizona Nationals at Wild Horse Pass Raceway Park in Phoenix, Arizona (that’s a mouthful!) featured one of the wildest funny car races we’ve seen in a quite some time when Tommy Johnson Jr. lined up alongside Jim Campbell in the opening round of eliminations.

Johnson and Campbell left together and were on what appeared to be a great side-by-side drag race when Johnson’s car broke a rear axle. While it would be foolish of me to say anything in nitro racing “never” happens, this isn’t something you see very often at all, despite the massive forced being exerted on the drivetrain between the 11,000 horsepower engine and the massive rear slicks.

Johnson thought the car had started hazing the tires, so he quickly lifted off the throttle to try to regain traction, then matted the gas again, only to have the engine detonate, ripping his Make-A-Wish Foundation Dodge Charger body to shreds and seemingly ending his day right there.

However, as Campbell streaked toward what everybody thought would be an easy round win, his Cattleman’s Cut Jerky-sponsored Charger drifted closer and closer to the centerline, eventually clipping the foam blocks that reflect the beams for the finish line timers, resulting in immediate disqualification.

Since Johnson managed to keep his car in his lane, he was awarded the victory despite coasting across the finish line on three wheels, as one of his rear tires actually broke free from the floater rear end and rolled farther down the track than Tommy’s car.

Johnson’s crew thrashed to get the car fixed for the next round, installing the rear end and body from their backup chassis while rebuilding the the engine, which was completely destroyed. They made it back in time for round 2, only to have the car drop a cylinder at the hit and explode yet again, destroying his second body and ending his weekend as eventual runner-up JR Todd raced to victory.