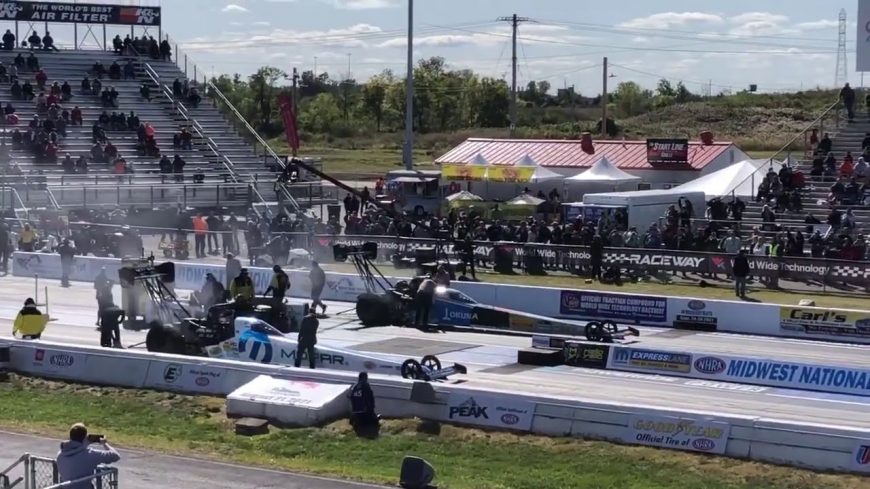 We truly never know what’s going to happen during the course of a race. Great things can happen as records fall and we watch photo finishes. However, on the other hand, catastrophe can strike at any moment, shredding components to a point where they’re not even recognizable.

Unfortunately, for Leah Pruett, this past weekend would prove to be rather catastrophic. As she lined up to race, everything seemed to be going as according to plan. Even as she fired her way off of the tree, things looked to be going pretty well. Apparently, though, something went wrong with the construction of the car. It wouldn’t appear to be anything that the driver did. However, catastrophe would unfold as power from the rear wheels seemed to disagree with the front of the machine.

As the power would pulse its way through the car, the construction of the machine would simply fail. With this, we would see the car split in half, sending pieces absolutely everywhere. In the process, Pruett even went flying through the air herself before coming to a stop.

Fortunately, the capsule that she was driving from would remain intact. In fact, she was able to hop out of the car just moments later and seemed to be fine in a post-race interview. She made a testament to those behind the car, saying that they do a very good job, even though it didn’t work out on this particular pass.

Below, we follow along with the pass itself that shows the pure destruction. This is just one example of never knowing what’s going to happen come race day. At the end of the day, this is why drivers and teams always prepare for the worst with top-notch safety equipment. A car splitting in half and trying to launch itself into orbit isn’t necessarily something that’s going to be all that common. However, in the instance that it did come up here, Pruett would be able to walk away to race another day.

Leah Pruett walked away from this UNBELIEVABLE crash during eliminations at the Mopar Express Lane #MidwestNats presented by Pennzoil.

« Haters Drove Him To Light His Square body On Fire