Haters Drove Him To Light His Square body On Fire 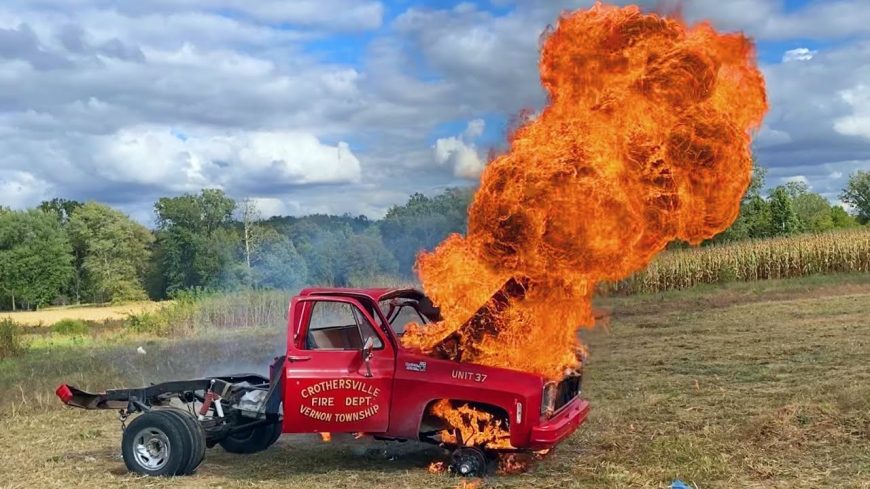 Another day, another episode of pure destruction. This seems to be par for the course over on the WhistlinDiesel YouTube channel. With every experiment, our host seems to one-up himself, creating more mayhem than one could ever imagine. The thing about it all is that it doesn’t seem to be adhering to any sort of curriculum. Instead, the destruction is rather random, or so it seems, at times.

Sometimes, the channel just breaks things because they feel like breaking things. I guess that viral formula has been proven to work as we have watched everything from a SEMA built Ford F-350 all the way to an Audi R8 have met by brute force on the channel. They even went so far as digging a hole and burying the F-350 entirely.

This time, we check in with yet another destructive path that takes out an old school square body Chevrolet. In a video that seems to be rather sarcastic, the crew at WD fires up their destructive minds once again. In response to what they call a hate comment, we watch as the truck is completely set ablaze. Not only that, but it has multiple holes shot in the side of it as it basically turns itself into a roasted carcass of what it once was.

By following along below, we join in with the path to mayhem. This truck once was a usable machine that lots of folks would’ve probably liked to get their hands on. With that, we find the angry comments flowing in droves. It’s actually a kind of interesting phenomenon that people keep harping about on the channel. At the end of the day, every vehicle purchased seems to be nothing more than an investment and making content. As bizarre as the idea might be, we think that it’s rather interesting to watch what might happen to some of these sought after rides. Apparently, some of the folks leaving comments don’t see things the same.

« Angry Kart Racer Throws an Entire Bumper at Opponent Speeding By Then Fight In The Pits.