Toyota Kicking Tacoma Out of America to be Produced in Mexico 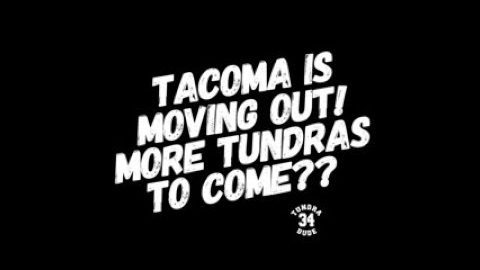 Toyota makes no bones about its attempt to invest in American jobs. With the consistent use of Americana in their ads, one might even forget that they aren’t an American company. Reality places Toyota in Japan but they’ve played it pretty smart to win the American market over. The brand has done its diligence in manufacturing here in the States. Some might even argue that it’s their duty as a company that sells so many units to Americans. One model, though, appears to be making a departure from American manufacturing.

One of the emerging trends in automobiles seems to be that folks are looking for bigger vehicles. These sorts of trends come and go over the years. Of course, there was a period where people wanted small and fuel-efficient vehicles. Nowadays, though, vehicles are getting larger. This might be due, in part, to the fact that gas prices aren’t so harsh right now. It probably will also help the cause when bigger vehicles begin to go hybrid or electric more efficiently.

For now, though, it looks like there might be a bigger demand for larger Toyota pickup trucks. Because of this, the brand will be relocating the production of its smaller pickup truck in the Tacoma. Currently, both the Tundra and Tacoma share a manufacturing location in San Antonio. This comes with the Tacoma having the second place of manufacturing in Mexico.

It appears as if San Antonio will be dedicating itself completely to the Tundra. Meanwhile, the Tacoma will be heading down to Mexico. In other words, if buying a vehicle that’s technically made in America is that important to you, this will be the last chance to get an “American made” Tacoma.

Toyota says that no job loss will accompany the change. From what we understand, the brand is in the middle of a 5-year plan to invest $13 billion in its US operations.