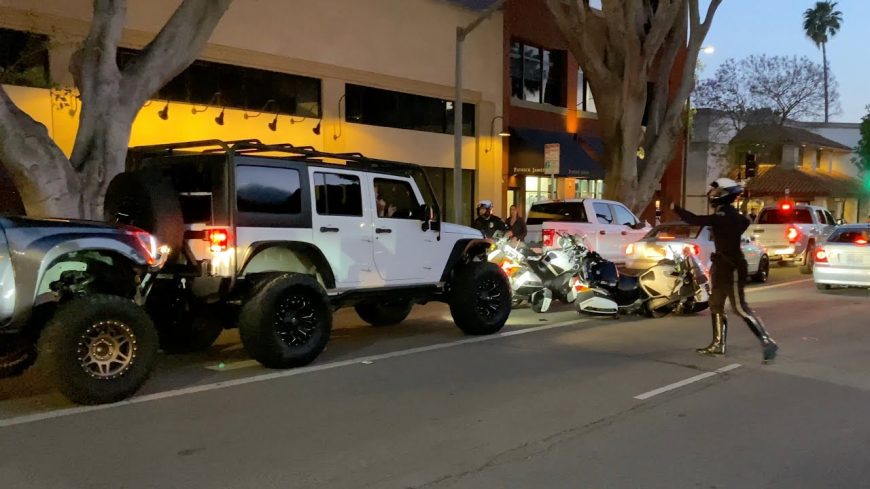 We don’t like to make ourselves feel better at other people’s expense. Sometimes, though, the individual in question just makes it far too easy. In this one, we tune into a situation that shows off an individual who makes us all feel better about our bad days. No matter how bad your day is going, chances are, it’s nowhere near as embarrassing as this particular situation was.

This was a situation that was blundered so badly that we had to watch it a couple of times to even figure out what was happening. Apparently, the footage came about as a part of a cruise night in San Louis Obispo, California, and a Toyota Tacoma owner really would end up wishing that he could go back in time.

As the Tacoma sat behind a modified Jeep Wrangler which was sitting behind motorcycle police, the Tacoma driver decided he wanted to show off. First of all, being unaware that the police are there is a tragedy but one that’s understandable. However, the Toyota driver proceeded to make this whole thing about a worst-case scenario. What happens next was what really made our inner cringe rise to the surface.

We would be left to assume that the Tacoma in question is being controlled by a manual transmission. We aren’t really sure how else the truck would proceed to begin to launch forward as the driver decided to rev it up to impress bystanders. Eventually, the driver’s attempt to peacock would fall incredibly short. As the truck lurched forward and into the back of the Jeep in front of it, it would create a sort of domino effect. For those who haven’t guessed yet, the Jeep would end up plowing into the motorcycle police and knocking the bikes over.

The video below showcases the entire embarrassing event that this truck driver was probably wishing wasn’t caught on camera. I guess that sometimes, lessons are learned the hard way.