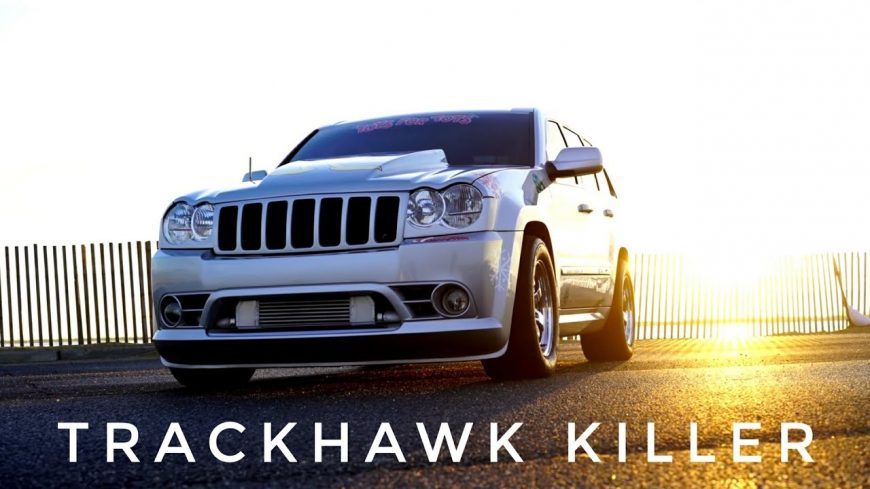 There’s been a lot of talk lately about Dodge’s new Trackhawk, an insane conglomeration of utility and performance that only the mad minds at Mopar could come up with. Combining the great looking Jeep Grand Cherokee with the amazing 700 horsepower supercharged Hemi out of the Hellcat Challenger and Charger, the Trackhawk is the most powerful SUV ever produced. However, the key word there is “produced”, because that 700 horsepower is certainly respectable, especially for a ride you can buy off the dealership lot and carry kids and groceries in comfort, but there are definitely SUV’s out there with more power on tap once they’ve been modified.

One of the most underrated SUV’s, at least as far as from a performance standpoint, is the SRT8 version of the Jeep Grand Cherokee. While it makes good power from the factory, Dino decided his needed a little more. And by a little more, he meant well over four digit horsepower levels, putting it in to a pretty exclusive club and building what has become one of the most insane family haulers on the planet. When you combine the horsepower output of an NHRA Pro Stock car with the ability to haul around a herd of kids, you’ve got your hands on something special, and Dino takes Joe from the Mod 2 Fame Vlog YouTube channel for a spin to demonstrate.

The Jeep is hardly a dyno queen, though, as many boosted builds seem to always turn out to be. Dino regularly hits the track and lays down some insane elapsed times to match the 1,500+ horsepower under the hood. As you might imagine, this thing draws a crowd everywhere it goes, something that not too many Jeeps can claim. Of course, running deep into the mid-8 second zone in the quarter mile gets you plenty of attention, and deservedly so.

While comparing Dino’s SRT8 to the Trackhawk is akin to comparing a handgun to a missile launcher, they are still both badass SUV’s that deserve a ton or respect. Thanks to Joe at Mod2Fame for putting this piece together to share with us, and we hope y’all enjoy it as much as we did.