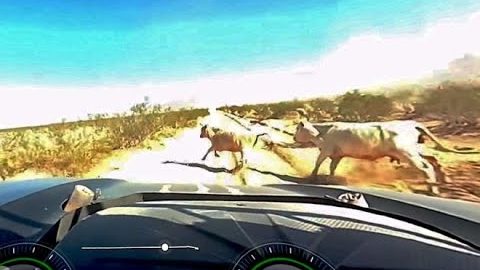 When a trophy truck gets out there and gets going, there are a lot of things to consider. With the nature of the vehicle and how it blasts through the desert, ever-changing terrain can be rough, even for some of the most capable vehicles on four wheels. However, with a combination of a purpose-built suspension and a powertrain that’s really built to take the abuse, these machines make their way through the desert at high speeds and make it look easy.

One thing that drivers probably don’t have at the forefront of their attention is the possibility that an animal could get in the way. Sure, somewhere in the back of their minds, they probably realize that an animal encounter is something that might happen. Perhaps a coyote will wander out across the path of a truck that’s tearing through the desert and end with a bloody situation. However, the possibility that a cow is going to randomly be wandering through the desert is probably pretty low.

During the 2019 “Best in the DesertParker 425” off-road race, though, that’s precisely what would happen to the Terrible Herbst Monster Energy Trophy Truck #91, driven by Christian Sourapas.

As the truck was cruising along at a 112 mph pace, a seemingly normal situation would spiral out of control in a hurry. As the trophy truck was making its way through the desert, a couple of cows would wander across its path. Now, at such a speed, it’s going to be hard to veer out of the way. However, what the driver did do was lay straight into the brakes. Apparently, according to the video description, this would lead the truck to pitch sideways, combined with hitting the massive cattle. This will destroy the truck and send it rolling over.

They do continue that staying on the gas probably wouldn’t have been a smart decision, either. If something comes flying through the windshield, a lower speed would drastically reduce the potential for injury. However, it appears as if the driver and navigator alike had no option but to hold on, slam those brakes, and hope for the best. Both would walk away.

« This Kid Is a Future Tug Of War Hero! Start Em Young!