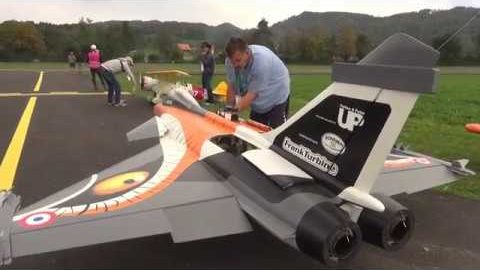 To most people, tooling around with something like a remote controlled airplane might seem like nothing more than a simple hobby that an amateur might be able to get into but for this RC pilot, he is anything but a newbie. Instead, his abilities behind the controls of this RC fighter jet might just make you completely drop what you’re doing and watch as he zips his machine around through the skies in ways that you never thought posisble

Getting in the field and testing out the remote control technology looks like a blast but to get to this level of expertise in the detail of this creation powered by a pair of turbines, we would think that it probably takes a good amount of time, effort, and commitment to get it just right. At the end of the display, you might even feel a little bit overwhelmed by exactly how he contorts this thing every which way possible to put on the ultimate showcase and makes people hit that share button when they see the amazing video that results.

When we do see what he is capable of behind the controls, you can definitely tell his abilities are nothing short of insane as he manages to take his oversized RC machine and makes it hover in place, something that almost seems to defy physics a bit and might just make you wonder exactly what kind of sorcery is at play when this thing really comes up with something to feast your eyes on. There’s no telling where this machine is heading next.

Check out the video below that shows off this insane pilot display that have this airplane going through some maneuvers that you might have trouble wrapping your mind around, even after seeing it with your own two eyes. What do you think of this display? Do you think that you’d be able to hop behind these controls and pull off a show like this one?